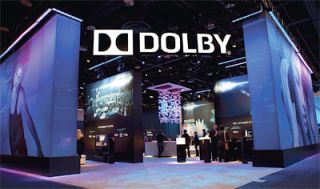 LAS VEGAS—Once again I have made my annual pilgrimage to the Consumer Electronics Show in Las Vegas. I have typically used the research I do at this show to write a column on audio from the standpoint of what is available to the consumer at home and I guess I will now have to expand my research to include mobile systems as well.

Dolby’s booth at the 2011 CES I was also interested to see what impact the passage of the Commercial Announcement Loudness Mitigations (CALM) Act had on concumer electronics manufacturers. Finding interesting audio topics and knowledgeable people was a little bit of a challenge at this year's CES because most of the hype was around 3D displays, Internet-enabled televisions and tablet PDA's and their plethora of applications.

NO DOG IN THE HUNT?

Virtually every television and set-top box manufacturer I spoke with seemed to think that the CALM Act was a broadcaster issue and didn't have a dog in the hunt. Most believed that it was up to the broadcasters to implement properly implement dialnorm and the CALM Act provided the club to insure that this happens. This reminded me of some of the data that I had acquired at last year's CES when I asked Dolby's folks why Dolby Volume was desirable. They pointed out to me that not everything that came into the receiver was Dolby encoded, so dialnorm metadata wouldn't be present when switching between cable and terrestrial channels. Nor would dialnorm necessarily be present when switching between inputs, like from television to disc to game console and now web content. So even after the CALM Act is implemented and broadcasters are in compliance, inconsistent loudness may still be an issue for many consumers.

Raising this point with various manufacturers resulted in requests for my business card so "someone from the head office could get back to me." Since I am writing this column immediately after the CES, no one has contacted me yet but I will try and follow up on this issue.

In my early years of working in the industry, I actually wanted to be a recording engineer for a record company or a studio. I realized pretty early on that as much as I loved audio, I didn't have the ears that the great audio engineers I met had so I had to content myself with fixing the tape machines and audio consoles. My work in radio provided me with a better opportunity because my ears were good enough to allow me to manipulate audio processors for radio stations and make them sound really.

When I moved into television I generally was the engineer that got the audio jobs because none of the video engineers really wanted to work on audio, and after all, pictures are what television is all about. In all that time, I have seen many bad pictures. Inconsistent color reproduction, smearing, white clipping, crushed blacks and washed out images and yet no one has ever demanded that television stations get their act together and fix their video. As a matter of fact, the only video problem that I have ever heard a consumer really get ticked off about was too much sync, which of course created a buzz in the audio. But what is it about bad audio that is so upsetting? Think about it! We now have a federal mandate dictating to broadcasters that they need to insure that their audio won't upset the audience.

First you need to recognize that the sense of hearing is different from the senses of vision, taste and smell. The latter three all involve a chemical reaction taking place within the body while the process of receiving sound is completely mechanical. All those tiny bio-mechanical devices within the ear gather in what you hear and send it straight to the brain. Not to the thinking part of the brain however, but to the emotional and pleasure centers.

I recently read the book "This is Your Brain on Music" by Daniel J. Levitin, a Professor of Behavioral Neuroscience as well as a musician and producer. In his book, he analyzes how the brain processes music and how it relates to our emotions. One of the interesting things he notes is that as the brain processes sound, immediately after the auditory cortex recognizes the sounds that the ear has received, the association cortex compares those sounds with past memories. This is how we remember a song and in theory the happy or sad times that we associate it. Other parts of the brain are also working on the sounds we hear such as rhythm, chord progressions and chord resolution. All of this takes place without conscious thought or analysis—this is why people say they love a song. On a fundamental level, the music is touching their emotional control center directly.

Sound makes its way into our brains with virtually no conscious processing and it elicits immediate emotional response. Therefore when it is done poorly or something completely unpleasant and unexpected happens it generates an immediate and emotional response from the listener. People don't think about sound, they feel about sound. This is why it is crucial to ensure that the sound that passes from our facilities triggers the right emotions with the audience.

In the 1974 southern rock anthem "Sweet Home Alabama," vocalist Ronnie Van Zant starts the song saying "turn it up" and millions of fans did because the music triggered an emotion that they wanted to intensify. The CALM Act is the inverse statement of "turn it down" and if we don't get it right we'll next hear the audience say "turn it off."