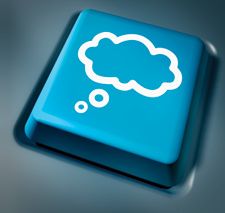 Those applications are accessed and run via a common browser on a computer, netbook, tablet, smartphone or any other IP-conncted device. It's the opposite of installing software programs on an individual PC and storing data on its hard drive. You don't own your copy of that software, you rent it.

Broadcasters have traditionally kept their video crafting tools and video materials locally in their facility, which really only made sense when they had shelf after shelf of bulky videotape and mechanical recording and playback devices. But with the coming of file-based video, stored on servers instead of shelves, and file-based editing, well known broadcasting equipment vendors have started to introduce systems based on the cloud. And they are making economical and workflow claims that are becoming hard to ignore.

Cloud-based computing has enabled Software as a Service (SaaS), which may be new to broadcasters, but it's not new to the information technology business.

"The biggest misconception [about cloud computing] is that it's a really new technology," said Greg Lennon, director of product management at Chyron in Melville, NY, "and people are afraid to be kind of initial adopters." Chyron's AXIS graphics platform was among the early cloud-based entrants in the broadcast market.

"The concept of cloud computing has been around for quite awhile, though in the broadcast realm it's absolutely a new area. But people don't realize how much they've been using cloud computing."

Ramki Sankaranarayanan, CEO of Prime Focus Technologies, which describes itself as a "Global Digital Content Services Hub," said: "As stations migrate from tape-based acquisition to file-based acquisition, the economics that drive the industry lends to the transition to cloud-based applications."

So how does it save the broadcaster money?

Chyron's Lennon amplified the point about upgrades and patches. "[With a cloud-based system], everybody is using the same version, so if there's a software bug that needs to be fixed, there's one deployment of code, and everybody gets the fix."

Prime Focus' Sankaranarayanan pointed to the advantage of paying for a service out in the cloud versus an in-building installation. "You're not putting down a million dollars up front, figuring out what the system will be like, and by the time the system is installed you find out your needs have changed."

But when the chief financial officer sharpens his pencil and does the numbers, there's a fundamental shift with the move to cloud-based software as a service: you're shifting away from capital purchases and paying the bill out of the operating budget.

Broadcasters can be excused for being wary of IT vendors, who have little understanding of their specific needs. Buying cloud-based solutions from long-established broadcast equipment vendors can give them better assurances that the systems will work in their worlds.

One point these traditional vendors make is that SaaS does not have to be a one-size-fits-all arrangement.

"It's about developing your own workflows," said Steve Owen, director of marketing for Quantel, "customizing the workflow to exactly what you want." Quantel recently launched its QTube cloud-based media workflow tool.

But at the same time, the vendors make compelling arguments for the advantages of having the video assets out in the cloud. A big one is collaboration.

Quantel QTube "Today, if I have an installable program, no one can see what I'm doing," said Kovalick. "[But with a cloud-based editing system], I can see the video you're putting in; we can be on the phone talking about it at the same time; and as you're scrolling through the video you're pointing out to me what you want to change and what you don't want to change."

Another advantage to having video assets in the cloud is the sharing of material. "You don't have to be right in the building to create content," said Lennon. He used the example of a station group sharing all its video material out in the cloud. "All of the content one station is creating is immediately available to anyone in the group. That's not possible with the sort of silos that traditional workflow affords you."

When queried about the number one concern broadcasters have about cloud-based systems, the word "security" popped up with unanimity. As broadcasters realize their video assets are ever more valuable, protecting them is key.

Kovalick noted, "Some people think the security of the cloud is better than it will ever be in a facility, because there's so much energy going into securing it."

"Backup is obviously another big deal," said Lennon. "You want to make sure there are regular backups happening to your data."

Sankaranarayanan mentioned the need to shop for cloud services with a reliability quotient in mind. "Some cloud systems are not reliable enough; tech support isn't good enough," he said. "Am I getting guarantees associated with my service?"

And access to the video material is key, especially in the every-second-counts world of television news. While the data pipe into the station itself may be broad, journalists on location may find themselves without a lot of bandwidth. There, instead of transferring high-quality video, the cloud may serve them proxy video, enough to make edit decisions, and let the high-definition video be substituted back at the plant.

The momentum for SaaS cloud-based systems for broadcasting is building, and Avid's Kovalick stated all of his company's professional and broadcast products now in development will be able to migrate to the cloud.