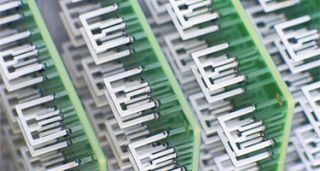 NEW YORK—During the fortnight after Aereo Inc. unveiled its plan to retransmit local broadcast TV channels via Internet bandwidth to cord-cutting viewers in New York and other markets, curiosity grew.

How would broadcasters seek to squelch the $12-per-month service, which offers 20 local TV channels? Would they focus on copyright or retransmission principles? Did the $20.5 million investment from Barry Diller’s IAC/InterActiveCorp. give Aereo more credibility than earlier TV-via-Internet ventures? Would the cable industry tacitly endorse Aereo’s approach, seeking a potential precedent for its own future retransmission battles? Could Aereo’s plan to reach mobile devices stymie broadcasters’ Mobile DTV initiatives?

Aereo claims that its dime-sized antennas receive HD over wireless broadband delivered via several large “antenna arrays” in the New York City area. When two groups of broadcasters sought an injunction to prevent Aereo from launching its New York pilot service, they unleashed a new array of questions. (The two groups include ABC/Disney, CBS, NBCUniversal, Telemundo and WNJU-TV in one cluster; Fox, PBS, WNET and Univision in the other.)

Would the two separate filings be consolidated into one case in a single court, and would a judge rule on the injunction request before Aereo’s target March 14 New York launch date? Why did broadcasters pick copyright attorney Steven Fabrizio of the Jenner and Block law firm to spearhead their case against Aereo? Was it because Fabrizio led the recording industry’s successful effort to shut down Napster’s file-sharing platform a decade ago?

In early March, Diller said that he expects Aereo to be available in 75-100 cities within a year. In a speech at the South by Southwest Interactive Festival, Diller said he’s ready for a “great fight” with broadcasters, who he said are launching an “absolutely predictable” opposition to the Internet TV venture, according to Bloomberg news reports.

The case stirs up a slew of contextual questions. How will the pending legal case of ivi.tv, affect the Aereo lawsuits? The ivi.tv case, dealing with a start-up’s intent to transmit local TV channels via the Internet, has been languishing for months; a mid-April court date is currently on the calendar (see “’Net Startups vs. Media Titans,” Oct. 20, 2010). Digital video recording—always a dicey issue in the video-on-demand environment—opens another set of challenges. Aereo’s proposal to include up to 40 hours of DVR capability with the monthly subscription piques the interests of advertisers and syndicators, although those issues are not part of the current legal actions.

Even as the case took its first steps into court, analyses and sabre-rattling began. Craig Moffett, the media/telecom analyst at Sanford C. Bernstein & Co., LLC, characterized Aereo as “nowhere near as simple as it appears.”

“The cable industry is likely to play the role of interested observer while the broadcast industry does the heavy lifting of testing Aereo’s premise in court,” Moffett told TV Technology. “The cable industry could be a net winner if Aereo wins in the court. Their leverage in retrans negotiations would dramatically improve.”

BTIG analyst Rich Greenfield was quoted as calling Aereo a “retrans killer” and predicting that the service could be a game changer that could radically alter the economic models of the media business.

“It has taken broadcasters nearly 20 years since the original Cable Act in 1992 and some hair-raising standoffs with MVPDs to finally get access to some cash for content,” Passwaiter said. “Don’t expect them to roll over on this one or immediately buy into the notion that they stand to increase profits thanks to Aereo.”

Passwaiter questioned whether Aereo’s service can increase a station’s viewership and ratings with “its limited over-the-air signals.”

“That math is a little complicated, and it’s going to be a hard sell to television owners,” he said, using the example of WNBC-TV’s 2011 revenue. BIA/Kelsey’s data shows that the NBC flagship generated up to $51 per year per viewing household based on ad revenues and retransmission fees.

“Should Aereo achieve 5 percent penetration of current MVPD households in New York, WNBC would stand to lose a few million dollars a year as would every other New York broadcaster getting retrans money,” Passwaiter explained.

“Simply put, Aereo is an unauthorized Internet delivery service that is receiving, converting and retransmitting broadcast signals to its subscribers for a fee,” the broadcasters argue. Later in the legal papers, they contend that, “By commercially exploiting Plaintiff’s programming and broadcasting infrastructure without authorization, Aereo seeks to compete directly and unfairly with [broadcasters and] …authorized retransmitters,” such as cable and satellite carriers. Citing Aereo’s approach as “willfully, wantonly and unfairly exploiting [TV content…] for Aereo’s own commercial benefit and in bad faith,” the broadcasters threaten further action for monetary losses.

That leads to still more questions about the value of the content. And the queries continue to gush forth.

Will CableVision System file a “friend of the court” brief on behalf of Aereo, supporting Aereo’s remote DVR capability? To some analysts, Aereo’s DVR features resemble Cablevision’s “Remote Storage Digital Video Recorder” networked DVR service that was challenged by many of the same networks now seeking the Aereo injunction.The Supreme Court ultimately refused to hear that challenge in 2009.

On the other hand, what’s the precedent of Zediva? That DVD streaming service was court-ordered late last year to shut down permanently after being sued by the Motion Picture Association of America. Conceptually, Zediva’s shared DVD-player set-up resembles Aereo’s shared antenna architecture, although that analogy is still a work in progress.

Even more urgent is the marketplace question, as many observers have noted.Will cord-cutting viewers pay $12 per month for the 20-channel broadcast package plus whatever sums they spend on Netflix or other over-the-top video sources to fulfill their video needs?

Girding for a Long Legal Smackdown

One group that will certainly benefit from the Aereo battle—as they usually do—is a cadre of communications and copyright attorneys. Aereo, which acknowledged that it had budgeted for a prolonged legal face-off, said in a statement that “it very much looks forward to a full and fair airing of the issues.” The company expects “a prompt resolution of these cases” and insists that Aereo’s technology “enables consumers to use their cloud DVR and their remote antenna to record and watch the broadcast television signal to which they are entitled anywhere they are.” Aereo’s founder and chief executive Chet Kanojia, at a February event unveiling the service, said he expected the legal challenges and insisted that the customized/individualized antennae and the cloud DVR are essentially usage licenses.“We understand that when you try to take something meaningful on, you have to be prepared for challenges,” he said.

Coincidentally, on the day after the broadcast groups filed their injunction request, the Federal Communications Bar Association ran an already-scheduled seminar in Washington.Its topic was “Internet Delivery of Television: Over the Top and IP.”

The broadcasters’ injunction requests in New York gave the five dozen gathered attorneys even more discussion fodder than they had expected. Among the FCBA speakers was Jack Perry, president of Syncbak, which is launching a system that lets broadcasters and content owners deliver live and on-demand programming to viewers on mobile phones, tablets, smart TVs and gaming systems, (see “Protecting Local Broadcast Streaming,” Aug. 24, 2011). His message: there are legal ways to deliver TV via the Internet with broadcasters’ participation.

Seth A. Davidson, a partner at the Edwards Wildman Palmer law firm in Washington, thought the coincidental timeliness of the FCBA program underscored the “dichotomy” presented by the Aereo venture. He called such services either a “potential threat or a potential opportunity,” depending on where you stand. Davidson predicted that the media communities will watch the case “very closely” because of its “potential disruptive effect.”

“What a court says might have future implications for other space-shifting applications,” said Davidson, who represents cable TV clients. He cited the effect on other upcoming cases in the courts and Congress “related to the status of technologies under copyright law and the Communications Act.” In particular, he pointed to the Satellite Television Extension and Localism Act, which expires at the end of 2014.Davidson expects the Aereo litigation could affect the next round of congressional deliberation.

John Hane, a media attorney with Pillsbury Winthrop Shaw Pittman who representsdigital video distributors including television stations, agrees that,“Aereo raises a lot of interesting questions” but observes that “even if they were to win in court, it doesn't mean this particular business model will be a success.”

“There is no question that broadcast stations need to find secure ways to get their signals to alternative devices both in the home and on the move,” Hane said. “The program suppliers, though, have made it extremely difficult for stations to do it on their own.”

“So at one level I like having inventive third parties out there pushing the envelope,” Hane continued. “That doesn't mean I support back doors around copyright and retransmission laws, of course. But a little motivation for the networks to be less ham-handed in how they restrict affiliates' ability to reach screens that don't hang on walls would be a good thing.”

Hane also cited the Syncbak approach as one that shows “the sort of appreciation for real world considerations that stations and their program suppliers might be able to get comfortable with.“He said that a service like Aereo is “not likely to build much of a business unless it has the support of broadcasters and their program suppliers, and that's going to require Syncbak-like respect for geographic exclusivity.”

“A well-defined case with some early victories might force networks and other program suppliers to re-think their positions on whether to continue blocking broadcasters from alternative distribution paths,” Hane said. “And that could be a good thing, as long as territorial exclusivity can be maintained.”

When Aereo unveiled its rollout plans and its investment, many observers were surprised by the network’s sanguine response, especially since they were aware of the project for at least a year.The company, formerly known as Bamboom Labs, had teased its intent.In the days immediately after the Aereo announcement, the networks, National Association of Broadcasters and others declined any comment.For example, even though the Aereo plan expects extensive access via handheld/portable devices, an Open Mobile Video Coalition official declined to comment.The OMVC’s boilerplate response was that Aereo appeared to be “an OTT residential cable competitor”and hence a “service…not part of the Mobile DTV mission.”

Yet as many subsequent reports pointed out, the Aereo signal could reach tablets and smartphones or future handheld devices without the requirement of either a broadcast-receiver chip in the device or an outboard dongle, such as the one that the mDTV Dyle broadcaster consortium has proposed.

More fundamental is the issue of wireless spectrum availability. While Aereo’s plan to deliver video via wired broadband “merely” relies on bandwidth, the ability to reach untethered devices is still unclear.Will it travel via WiFi or other unlicensed spectrum?

That’s another of the Aereo questions still up in the air.