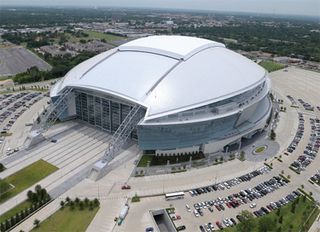 DALLAS—When a small army of cutting-edge gear packed securely in a convoy of nearly a dozen production trucks began arriving at Cowboys Stadium in late January for Super Bowl XLV, it again signaled the start of one of the most ambitious remote set-ups in broadcasting.

Cowboy Stadium, which cost $1.3 billion and opened in 2009, will host Super Bowl XLV Yet as far as Fox Sports is concerned, less may be more when it comes to its primary telecast on Super Bowl Sunday, Feb. 6, at the $1.3 billion facility recently built between Dallas and Ft. Worth in Arlington, Texas.

"The thing I've learned in the past three Super Bowls is we don't have to 'over-think' or 'over- engineer' what we do," said Jerry Steinberg, senior vice president for field operations at Fox Sports. "The simple solutions are the elegant solutions. To me it's all a combination of planning and producing and always keeping it simple. It's more elegant going in lean than in producing a lot of extra crap just because somebody else had a lot of extra crap [in years past].

Consequently, the number of field cameras at the event likely will be less than in years past (albeit slightly) to an estimated 42—not as any cost-cutting measure, but because more simply are not needed, according to Steinberg. (Still, an estimated 60 cameras in all will be used for various game-related programming.)

"My approach is we just try to bring a hundred-million living rooms onto the playing field as far as our pictures, audio and commentary," he said. "You must see and hear everything that happens as though you were on the field." As for HDTV's 5.1 surround sound, "It's our signature. We've won 20 Emmys for audio in all the sports we do. We do television—not radio—and it's essentially a single thread of pictures and sound."

One emerging technology that will not be deployed at America's biggest televised event will be 3DTV. Steinberg believes "3D is a technology that doesn't have a sustainable business model for us… Nobody's going to pay for it yet. I think 3D is the real thing, but it's got to take time. The thing works. It's a unique experience. But it will follow a similar timeline as HD. And it took 10 years for HD to become what we now simply consider 'TV,'" he said. Instead, most of the "2D" field cameras will be Sony units set for 720p/60 fps.

For viewers, perhaps the most noticeable technical improvement in game coverage from year to year may be high-speed cameras that can slow frenzied game action to near-stillness without jutter or other artifacting. Steinberg says some high-speed cameras can now capture content up to many hundreds of frames-per-second. "The 'money replays' on the key plays in the game are coming from these high-speed devices," he said. "Each year they improve. When you can slow these cameras down that much, there's just so much more captured 'information' that can be used in a lot of creative ways."

Among the planned 42 field cameras, there will be a mix of Sony HDC1500- and HDC3300-series high-speed units (capable of 720p/180)—as well as Sony's HDCP1 that will be used as the game's cable-cam hovering over the field via guide wires. Other high-speed cameras will be supplied by Inertia Unlimited, whose "X-mo" series units can achieve up to 2,000 fps for 720p.

While some Super Bowl segments are produced independently from the main production center (i.e., this year's halftime show featuring the Black Eyed Peas) and consequently use separate production trucks and cameras from NEP and others, Hudson, N.H.--based mobile production provider Game Creek Video will handle most of Fox's primary telecast. The firm's remote operations will be housed in its four FX trucks—in addition to its dual-truck Liberty and dual-truck Patriot facilities.

Fox Sports plans to deploy 42 cameras throughout Cowboy Stadium to capture all the action of Super Bowl XLV. Jason Taubman, Game Creek's Super Bowl project manager, said GCV will reprise much of its technical infrastructure from its last Super Bowl with Fox three years ago in Glendale, Ariz. "We've updated the EBS networking capability quite a bit [and] we'll be using Gigabit Ethernet to transfer clips around now, in addition to the SDTI network we've used in the past."

The technical heart of Game Creek's primary broadcast will be Grass Valley's next-gen Kayenne video production switcher, although Grass Valley's older Kalypso and smaller KayakDD switchers also will be used. It will be the first time the Kayenne has been used for the game's main broadcast.

"The big showcase is Kayenne," said Scott Murray, Grass Valley's general manager for live production. "It's a generation above the Kalypso, which has been [a] production standard for more than a decade." Kayenne provides 1.5-to-4.5 M/Es and a digital 10-bit 4:2:2 switcher with 48 outputs and up to twice as many inputs. It boasts six keyers in every full M/E—(specifically, four full-function, and a pair of linear/luminance keyers).

Murray said the primary telecast will continue to be framed in 16:9 HD and "center-cut" for 4:3 SD viewing. "The biggest technical transition over the years has been simply going to HD," he said. "Just the pure creative things we can do now with HD are amazing. For me, personally, I think this higher resolution is more appealing than 3D."

As for the site itself, Game Creek's Taubman thinks Cowboy Stadium "has really gone the extra mile" to be sure it's friendly for television production. "Most stadiums make a passing nod to television, but this place is really set for war," he said. The still-new behemoth arena is home to the largest HD viewing screens in the world, according to the Dallas Cowboys. "We don't deal with their super-big HD screen, but we plan to share many of our [resources] for their own in-house uses," Taubman said.

As for getting the telecast to the rest of the planet, Taubman said "mainly we'll use fiber as our primary path out of Dallas, and then Ku-uplink it to Fox in L.A."