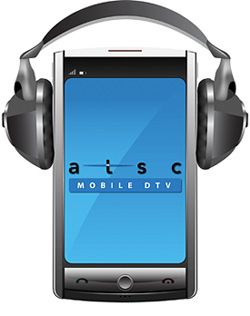 ALEXANDRIA, VA.—By their very nature and portability, Mobile DTV receiving devices are going to find themselves being used in a variety of environments: building lobbies, aboard public transportation, out of doors and what-have-you. These locations may be convenient places to tune in and view, but the ambient noise can render it hardly a theatrical atmosphere.

No surprise then that intelligibility of audio to those listening to mobile viewing devices while out and about has become an issue. In particular, the ability to hear dialogue has been cited as an area with room for improvement.

In a theater or relatively quiet home viewing environment, a hushed conversation between actors might be heard clearly, though it is many times lower in volume than the car crash or dance-hall music that preceded it. In less quiet surroundings, that low level dialogue might not be discernable.

Fortunately, there appears to be a solution on the horizon that will allow content providers to produce their programs with wide dynamic audio range (the ratio between the loudest and softest audio) for the home theater experience, yet provide a more compressed dynamic audio range for mobile device viewing, (translation: "Turn the dialogue up so you can understand what they're saying.")

"There is discussion underway regarding the current standard, and the potential need to include audio metadata," said Mark Aitken, director of advanced technology for Sinclair Broadcast Group and chair of the Specialist Group on ATSC Mobile/Handheld (M/H), TSG/S4. When he spoke to TV Technology the day after Labor Day, his S4 specialist group had just met and discussed the audio question via conference call.

The metadata he's referring to are instructions about how to play back the program audio in various listening environments, for example home theater, from the home TV set's own speaker system, through headphones, and so forth. Such metadata is required in the terrestrial ATSC program signal (via the Dolby AC-3 audio codec), but was left as optional in the original ATSC Mobile DTV standard.

"Whenever something is optional it means it could leave a lot of room for misinterpretation," said Jeff Riedmiller, director of Dolby Labs' sound platform group.

DaySequerra M2DTV audio processor
He pointed out that such use of metadata is not new territory for mobile device makers. "There are a lot of mobile devices, a number of mobile phones, that use a Dolby Digital Plus decoder, that will leverage this metadata." But he doesn't know of any present Mobile DTV-enabled devices that could utilize metadata if it were present in the Mobile DTV bitstream.

But the fact that device makers have institutional knowledge about working with metadata means that they wouldn't be starting out flat-footed. They are waiting for a concrete amendment to the Mobile DTV standard on the deployment of metadata that they can develop their devices to.

Aitken sees his specialists group's job this way: "S4 is engaged in understanding, from the position of broadcasters and device manufacturers, how we bring those ends together. What is it that broadcasters intend to do, so that receiver manufacturers can build devices in response to those needs?"

Linear Acoustic AERO .mobile audio loudness manager
Skipping quickly down to the bottom line, dollar-wise, what would the inclusion of metadata in the broadcaster's Mobile DTV bitstream cost? Aitken said that in Sinclair's case with the Harmonic encoders the company has deployed for Mobile DTV broadcast, it would be a software matter, easily installed.

Mark Aitken Program audio metadata is playing a role in a hot-button issue already facing broadcasters front and center: The CALM (Commercial Advertisement Loudness Mitigation) Act, which requires broadcasters to ensure that commercials are played back at the same volume as the program content. Metadata describing the program's loudness is used to help the playback device normalize all of the audio.

"That metadata that the broadcaster already has at his fingertips, because he's generating it for AC-3, that same data, perhaps in a different field, has usefulness in the mobile DTV world," said Aitken.

Prior to the development of a metadata standard for the Mobile DTV bitstream, there are measures broadcasters can take to optimize their audio for Mobile DTV, including a number of audio processors available for just that task.

"Originally when we looked at the problem we thought we might offer an inexpensive version of one of our existing processors, and everything would be good," said Tim Carroll, president of Linear Acoustic in Lancaster, Pa. "In fact, it required us to go back in and rethink about processing in terms about the devices that Mobile DTV would be played on." Over the past year, Carroll said his company has begun delivering broadcasters its AERO.mobile Audio Loudness Manager for Mobile DTV.

David Day, president and CEO of DaySequerra, a W. Berlin, N.J.-based developer of high performance audio processing solutions for radio, TV and the Internet, said his company did a lot of work stress testing the [HE-AAC, Mobile DTV audio] codec, seeing what it does under a lot of circumstances.

"Our M2DTV processor works to restore some of the attributes we think are necessary to keep the content and dialogue intelligible. It's dynamic range reduction, volume management, and dealing with artifacts that the codec adds or takes away. We try to mitigate and restore that."

So there are near-term and longer-term solutions for improving Mobile DTV audio. The success of the venture is, like so many things, tied closely to a successful consumer experience.