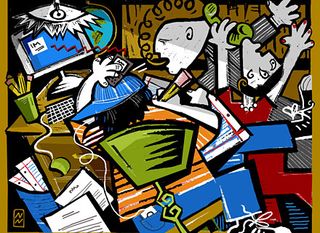 NEW YORK and ALEXANDRIA, VA.:It’s impossible to text, instant message or surf while watching 3DTV, and that’s an obstacle to adoption, according to the latest very expensive research. The Nielsen Co. along with the Cable & Telecommunications Association for Marketing cranked out a “comprehensive study” on the “3DTV experience.” The pair shared some tidbits with the hoi polloi--the typical carrot to get hacks to bite and pique interest for non-members with $9,500 to burn.

And those tidbits are...

That folks in general are familiar with 3D content because of increasing number of movies released in the format, and its use in theme parks. That exposure is translating into interest in 3DTV. That interest is highest among video gamers, early tech adopters--no surprise there--and film buffs.

However, while consumer interest is generally high, it’s “tempered” by concerns about 3D glasses “and the inability to multitask,” CTAM and Nielsen said. Some 89 percent of those responding complained about the limitations imposed by having to wear shutter glasses. Looking away from a dual-image stereoscopic 3DTV screen in synched-up active shutter glasses is likely to have a strobe-light effect on vision.

The cost associated with 3DTV sets also created resistance, although prices in some cases are approaching parity to no-3D, HDTV sets. (See “3DTVs Get Cheaper By the Week.”)

The study was conducted at the CBS TV City Media Lab in Las Vegas, in a “condominium that closely imitated a 3DTV home viewing environment,” the pair said. Around 425 people 18 and older were grilled after watching a 30-minute segment of 3DTV programming.

Among other findings, about 12 percent expressed interest in buying a 3DTV set in the next year after seeing a demonstration. The ratio was 25 percent beforehand. They expected to pay, on average, around $20 a month more for 3DTV content from multichannel providers.

3DTV surveys are all the rage because of the hype surrounding the medium. Strategy Analytics recently reported that 17 percent of Americans believed viewing 3DTV posed health risks, while another 55 percent were unsure. Strategy also polled U.K. consumers and found HDTV owners twice as likely to be interested in buy a 3D set as non-HD owners.

See...
September 7, 2010: “HDTV Owners Twice as Likely to Buy 3DTV Set”
Brits who own a high-definition television set are more than twice as likely to buy a 3D television within the next year as those without an HD set.

August 25, 2010:“Americans Are Leary of 3DTV Side Effects”
Seventeen percent of Americans believe that viewing 3DTV poses health risks to the eyes, and a further 55 percent “aren’t sure,” a new survey of 2,000 U.S. consumers from Strategy Analytics’ Digital Consumer Practice reveals.