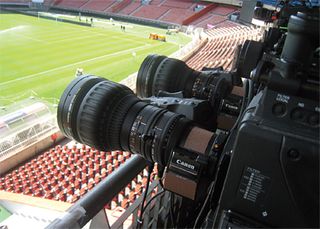 SEATTLE—Though TV Technology's younger readers may not remember those days, there was a time when cars didn't have windows that used electric motors to roll up and down, or electronic door locks. But the luxury car makers developed both features for their priciest models, and it wasn't too many years later that electronic windows and door locks showed up in pretty much all cars coming off the assembly line.

That same paradigm has been followed by many members of the television production equipment family. Camera lenses are a great example of this, because lens makers today are being challenged to develop lenses with new, higher performance specifications, to meet the needs of digital cinematography. And while the first models of these more high performance lenses will of course bear a hefty price tag, those of us with more modest budgets will, in a few years time, find some of those advanced features creeping into the everyday lenses we all use.

Canon Broadcast lenses were used in a 3D configuration to cover the 2010 FIFA World Cup.4K CAMERAS

Any video image is no better than the weakest point in the acquisition signal path, from the front of the lens all the way through to display to the audience. And as other parts of that signal chain improve, the lenses have to keep up. Such is the challenge presented by the new 4K cameras that have recently been introduced.

(There's an ongoing argument as to what a 4K camera really is, which is beyond the scope of this article. For the purposes of this explanation, 4K cameras basically represent a doubling of the resolution of prior digital cinematography cameras.)

A doubling of resolution is a good thing, especially when the images are to be viewed on a 50-foot theater screen. But inviting such critical viewing also highlights lens errors that lower resolutions on smaller displays may have hidden.

Chromatic aberration is one such problem that has come more to the forefront with the new higher resolution video cameras. Chromatic {color} aberration (error), in simple terms, occurs because of the unequal refraction of light rays of different wavelength, which is the property that yields a rainbow of color from a prism.

To the viewer's eye, chromatic aberration is seen as a bleeding of one color or another along an edge of detail in a scene. Lens designers go to great lengths to correct for this, so that all colors that make up a particular piece of detail in the viewed image converge at the same point on the sensor. In working to achieve such correction, lens makers may find they have to add additional glass elements into the lens. Adding glass elements is not without its costs, however, both financially and in transmission of light.

As light passes through a lens, every time it enters or leaves a glass element, some light is lost to refraction. While the amount lost to a single element may seem small, the cumulative effect of passing through a dozen or more elements can severely rob the light from an image. A way of mitigating such light loss has been found in applying coatings to the lens elements, and lens makers continue their research into more exotic coatings to pass ever more light through a lens.

The new 4K cameras aren't the only area of motion picture production that are upping the ante for lens makers. 3D production brings a whole new level of problems.

3D production requires a pair of cameras with lenses to be used at the same time to provide a left-eye and right-eye view of a scene. Those lenses must be exactly matched in a number of critical ways. When zooming, for example, the speed of each zoom must be exactly the same, and at any point during the zoom they must be at exactly the same focal length. The lenses must also be identically in focus at the same point.

Another lens error that, if minor, might go unnoticed in 2D production, is optical centering. To understand the concept of the optical center, think of a camera and lens aimed a dot at the very center of the image. As the lens is zoomed, a perfectly optical-center adjusted lens would keep that dot exactly in the center of the image. If not, the camera operator would need to pan and/or tilt the camera to keep the dot, or scene, centered.

Imagine the two camera-mounted lenses rigged as a stereoscopic pair, with let's say the left-eyed a perfectly optical-centered lens. However, right-eyed lens has optical-centering problems through the zoom range. Since the stereo effect depends on offsets of left-eye and right-eye views of the scene, these mismatched lenses could yield a bizarre and unrealistic 3D scene as the lenses zoomed.

The corrections that lens makers have come up with to deal with these problems for 3D production will also begin to find their way into their wider lens product line. The result will be more perfect lenses for everybody.

So as those of us who may never make a feature film read about the newest lenses and other bleeding edge equipment for Hollywood production, we can do knowing that many of the capabilities of that new equipment will eventually end up in our hands.