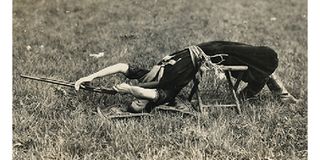 SKEPTASIA:This is a finger-pointing screed about the machinations of spectrum policy reform that starts with a contemplation of reality TV. Perhaps you’ve noticed the striking similarity between C-SPAN and “Keeping Up With the Kardashians.” I have, but only recently, because I don’t have pay TV. I don’t see the point, notwithstanding my tragic lack of pop culture acuity. And so it is, when holed up in a hotel room with pay TV, watching the Kardashian phenomenon is like visiting another planet where the beings do and say things that beggar belief.

Both the Kardashians and Congressians are purported to portray “reality,” but nowhere in Wikipedia can I find which version.

I was first exposed to the inner workings of Congressional hearings when I covered TV issues on Capitol Hill. Say what you will about the late Sen. Ted Stevens of Alaska, but he swept aside a gaggle of hacks to hold a door for me when I was on a cane with a mangled foot. Reporters sure don’t do that for one another. Stevens was good for questions, as we all know from his infamous characterization of the Internet as a “series of tubes.” It was as fitting a description as any I’d heard, yet the man was cyber-savaged by techno-bullies who were not awarded the Distinguished Flying Cross for risking their lives in the service of the United States during World War II.What happened to him later at the hands of his own colleagues is stupefying, and frankly, I hope they are ashamed of themselves.

Given the way they eat their own, I can kind of see how lawmakers might not want to keep it real, but rather employ techniques that mimic reality*—as several did this week during a House subcommittee hearing on oversight of the Federal Communications Commission. The esteemed gentlefolk on Capitol Hill enjoy calling the commissioners in for an occasional grilling because finger-wagging at lesser bureaucrats makes for good C-SPAN, like marriages on the planet, Kardash, only much, much more expensive.

This week’s episode of “Keeping Up With the Congressians” featured several utterances of the word “inventory” in conjunction with the word, “spectrum,” as in, “spectrum inventory.” The notion of doing a spectrum inventory appears to be catching on in Congress now that the commission is well on the way to auctioning off the TV airwaves, no questions asked.

Certain folks plagued with rational thinking considered a spectrum inventory a vital first step in reassigning frequencies for wireless broadband. And by, “first,” I mean, before Congress authorized the FCC to let wireless providers take over the TV spectrum. However, Congress needed mythical figures to balance its mythical budget, so it passed spectrum auction authority—with the loophole that if not enough TV frequencies were volunteered to cover the cost of relocating broadcasters, no auction would be held.*

Several lawmakers actually did call for a spectrum inventory before auction authority was granted. After a year or so of hemming and hawing, FCC chief Julius Genachowski casually said the commission already had an inventory and didn’t need to do another. Whaaaa? Where was it, then? On his old iPhone? Nope, not there. In his pocket? No. How about behind your ear… We don’t know, because it never saw the light of day.

Now, Mr. Genachowski is what’s known as a “public servant” whose position is arguably the equivalent of the Attorney General for the First Amendment. The FCC holds powerful sway over the information that does and does not reach every home in America. As such, you would think that Mr. Genachowski would demonstrate a modicum of respect for free speech by doing everything in his power to make all aspects of spectrum policy reform available to the public he serves. Instead, his actions suggest he is either a condescending pedant, or just another self-serving opportunist.

Personally, I would like to think he is neither, but he’s not given me much to run with—and I doubt he gives a hoot.

Genachowski is used to playing hardball in the business world with Barry Diller, whom I’ve been told can be a good one for scathing belittlement. We know what Diller’s up to in his dotage, (Sarcasma runs amuck today…) so it should come as no surprise that one of his protégés is outmaneuvering the people who are supposed to tell him what to do. It wasn’t rocket science to simply wait out Congress. The law-making body would have auctioned off its grandmother to pass a budget bill. What’s a few hundred TV stations going dark so Verizon and AT&T can do nothing with the spectrum for the next 10 years? A small price to pay for continuing to provide unemployment benefits for millions of jobless voters in an election year.

The chairman also was pressed during this week’s hearing for the post-auction, channel-repacking model that many now believe was a manifestation of mixing pixie dust with Red Bull. A preliminary version of this Allotment Optimization Model was described two years ago in an FCC white paper, and has since vanished like Sasquatch. Rep. John Dingell (D-Mich.) once again asked Genachowski about the AOM, as he did last summer, when the chairman said this:

“Should Congress grant the commission the ability to conduct voluntary incentive auctions, I commit to you that we will put the then-current—and further refined—version of the AOM out for public comment before setting the rules for the auction.”

Let the blame fall where it may, but all of these people will be enjoying plush retirement when this fraud finally is perpetrated upon the American public. The windfalls enjoyed by its architects will make Sen. Stevens’ home renovation look like a rebate from Home Depot for 25 wood screws.