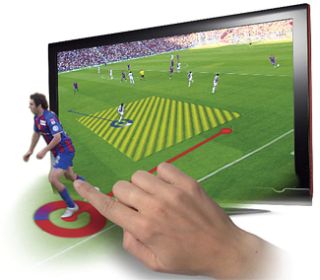 SAN FRANCISCO—Through a shadow, a shade, a soft movement or bright spark, an entire story can be told. The possibilities are nearly infinite when it comes to telling a story or building a brand when using the capabilities of graphics.

Over the last decade, graphics technology has evolved from its status as a part-time player to an everyday staple of a broadcast station's basic building blocks, and nowhere is this more prevalent than in the sports arena.

NBC Sports created numerous HD graphics throughout its live broadcast coverage of The Preakness. This graphic showing real-time betting odds was shown to viewers just prior to the running of race. "There's nothing more efficient for us than how Sunday Night Football works from a graphics perspective," said Matt Celli, producer of graphic operations and playback for NBC Sports and Olympics. "Graphics are a huge part of telling the story. A couple of years ago, there was an ancillary feel [to graphics' role], but now we built our graphics up. We want to bring viewers that much closer to the game."

The spectrum of sports graphics runs the gamut: from a simple game clock countdown to today's three-dimensional virtual reality creations that use the technology to tell a story in a way that wouldn't have been possible a decade ago.

"When an analyst can break down a play for the viewers, or the producer can illustrate the story with enhancements, it brings a significant value to the show," said Shaun Dail, vice president of sales and marketing in North America for Orad. "Tools such as measuring the distance a player runs in a volley, or how one player makes his opponent cover a tremendous amount of court area to wear him or her down is very valuable."

Take for example the recently run 136th Preakness Stakes horse race, held at the Pimlico Race Course in Baltimore. Host broadcaster NBC relied on a combination of graphics solutions to cover the event, ranging from a starting lineup spreadsheet to virtual on-screen index cards that coordinated the race horse with the colored silks worn by the jockeys. But this year, the network gave graphics an even greater role and worked with Las Vegas-based Horse Racing Simulation LLC to create an animated horserace that attempted to interpret analysts' forecast of the outcome of the race—complete with the start out of the gate, flying dirt and debris, and riders jockeying for position.

In the end, the ultimate goal is to create a set of graphics that do what broadcasters do best: tell the tale.

"The driving force for our broadcast is being able to tell a story," Celli said. "For horseracing, [the production team] often has a specific idea of what they want done. They give us great direction for how they want this stuff to work within the confines of their broadcast."

For this year's Preakness, that meant using a number of pre-packaged graphics creations that originated on Adobe After Effects or Maxon Cinema 4D played back on an EVS system or on a Chyron HyperX3 on-air graphics system, the latter of which NBC has been using since the 2008 Summer Olympics. "We've had great success [with it]," Celli said. "We worked with the art department to have them set up certain designs. It was easy for us to replicate those sorts of aesthetics and movements in the Chyron in real time. It was easy to get graphics right to air."

At the Preakness Stakes, NBC debuted a modified version of its current sports look. "Our art department started from scratch with some new animations and new elements to give us a new look," Celli said. "We wanted to give horse racing a much-needed update, and so did some real-time 3D geometry and real-time texture mapping to display horse name and the odds."

In March for the Kentucky Derby, NBC worked with Wakefield, Mass.-based electronic tracking firm Trakus to create a real-time telemetry animation. At the Preakness, NBC worked "with a lot of their telemetry information and turned it into graphics used during the running order of the race," Celli said.

That included building a graphics and telemetry system that could take in the video and track the race via a pointing arc, so viewers could follow a horse as they moved around the pack. The network also used its Chyron lineup at the Belmont Stakes horse race in New York, the French Open in Paris and then the Wimbledon Championship in London before moving on to NFL coverage in the fall.

"There's nothing you can't do with the system if you're strategic about it," said Damon Versaggi, production manager at SportsNet New York. "We're really graphics heavy here, in one way to get people's attention and in another to get our stories across and keep people interested. The ability to have a CG controller and the versatility are the most intriguing aspects."

Vizrt acquired LiberoVision in 2010 to offer 3D sports analysis. After acquiring the firm LiberoVision last year, Virzt has worked to create tighter integration between graphics and the management of assets with a sports platform that combines a 3D sports analysis and replay system with a broadcast graphics and media asset management system. The new product integration allows Libero Highlight clips, which include defined starts and animations, into the Vizrt workflow to analyze plays and address offside disputes. The Libero technology, called Libero Highlight, transforms camera feeds into realistic 3D representations, which can be slowed or stopped and illustrated with sports analysis tools to enhance the understanding of a game.

At the French Open and Australian Open tennis tournaments, ESPN used AdVision and MVP technologies from Orad. MVP was used by an analyst to break down, in detail, plays, volleys and other action on the field to better tell the story to the viewer, Dail said. The technology is based around a unique, patented tracking system that provides graphic enhancements that move with the video, he said. "Most previous methods of enhancement were limited to still frames, and often when the clip was run, the action moved beyond the enhancement, and the enhancement lost its value."

As opposed to a fixed set of tools or features, the MVP system is used as a graphic enhancement platform. Likewise, AdVision allows for the placement of ads on the chroma boards in baseball, or on the ice, glass and boards with hockey, or even on the moon itself at the 2008 NBA All-Star game in Phoenix. "AdVision is unique in that it allows full video to be mapped to any object, real or virtual, including animations, animated ads or still ads," Dail said.

In the future, the industry can expect to see an emerging number of very fast enhancement systems, as well as live player and object tracking—perhaps even holographic representations are on the horizon. "This will give analysts a wealth of data and information that can be passed to viewers and used in analysis," Dail said.

One area that's not so clear-cut is that of 3D. "It's interesting, as 3D interest seems to be waning a bit," Dail said. "There are some unique challenges to 3D, such as camera convergence issues, placement of graphics and others. We currently only have European stereographic graphics customers. But all of our tools are 3D, and are also stereo capable. The term 3D can actually be confusing when talking directly about graphics."

NBC's Celli concurred, noting that it seems as though 3D and sports production has cooled off over the last six months. "I think the trend going forward is to try and do things with the manpower and resources you have," he said. "There are a lot of great graphics devices [on the market]."