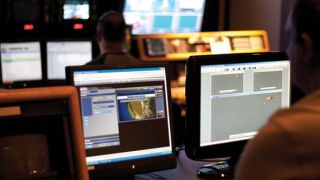 It’s 2012, and a significant and growing portion of the population is using more than one screen when consuming media. According to several current polls, 88 percent of TV viewers use a “second screen” — a smartphone, tablet or laptop — while watching. Many are reading e-mails, chatting and just plain surfing the Web. This is the new reality in which broadcasters have to fight for attention, even when the television is tuned to their channel.

However, there is also a bright side. Of those polled, 38 percent of viewers say that browsing the Web enhances their TV viewing experience. They use the second screen to get the background of a show, research an actor and even purchase items used by cast members. They are using Twitter and other chat tools to share the viewing experience.

The graphics operator can manage the second screen with social media content.

The stakes of the second screen/social TV revolution are high, and the potential impact is clear: Unmanaged, the second screen will draw viewers away from broadcast television. But, if used correctly, it can build viewer engagement and numbers. To this end, many broadcasters are looking to leverage new technologies to provide a more engaging, social, interactive and inclusive TV experience that, in turn, will help increase ratings and open new revenue streams.

The second screen has many definitions. Let’s start with the device itself. For the purpose of this article, it is any connected visual media device that can be used alongside the traditional broadcast television, or first screen. In addition to smartphones, tablets and laptops, smart TVs and set-top boxes can also be second-screen, even though they share the first screen.
Second-screen activities are divided into those related and unrelated to the first screen. The unrelated activities such as e-mail, chatting, texting and surfing are obviously bad from the broadcaster’s perspective. Each broadcaster wants the viewer to prefer activities related to its programming. Show-related activities can be activity on social sites such as chat rooms, posts on Facebook pages and tweets via Twitter hashtags. Informational websites and companion apps are popular, especially for sporting events and dramas with complex plot lines. Interactive polling campaigns also are a great way of getting viewers involved in a show.

One surprising footnote to the second-screen/social TV revolution is the return to live viewing. Media consumers cannot join in the “social conversation” surrounding a popular show or sporting event if they DVR it. And, they cannot risk encountering a spoiler. This return to appointment television is good news for the broadcaster.

The broadcaster’s goal is to tie together the first- and second-screen experience, and thus maintain (or regain) control of the viewer’s attention and social buzz. In doing so, broadcasters can enrich the viewing experience and retain advertising revenue.

The most compelling second-screen experiences are those that are tightly synchronized with content. New tools and workflows are needed to accomplish this, especially in live television production. Graphics production tools and workflows serve as a great solution by which to provide this synchronized experience, as they enable broadcasters to link the first screen to the second and back again. Today, pioneers are exploring different ways to do this, and they are finding a lot of success.

If the graphics production platform features a few key tools and components, broadcasters can quickly and easily create social and second-screen viewer campaigns on demand, with accompanying graphics. Models exist for integrating social data into news production, as well as for sports and other live productions. (See Figure 1.) A central gateway serves as the interface through which viewer comments (e.g., SMS, Twitter and Facebook) and viewer campaign data (e.g., voting data) are funneled into the newsroom system. Producers working within the newsroom system (NRCS) can use a graphics plug-in interface to create social campaigns and accompanying call-to-action/result graphics, which then can be dragged into the script and fed to the on-air graphics playout system for delivery to air.

This provides broadcasters many opportunities for branded on-screen graphics that tie the first screen to the second and the viewer to both screens. A call-to-action graphic is one that encourages viewers to tweet, send a text message or download an app for even greater interactivity. “Poll results” graphics show viewer preferences in a variety of creative data visualization methods that are a great opportunity to develop a unique look for a program. Figure 2 shows a graphic called the Tweetometer. The meter swings one way and the other based on relative tweets per minute (TPM) of two topics selected by the producer. This is a simple and memorable way to encourage viewer participation.

Figure 2. The Tweetometer is an on-screen graphic that shows the level of tweets related to programming.

What types of elements can users create from within today’s graphics production platforms? Using call-to-action and results graphics templates, stories can be enhanced with the addition of viewer campaigns, such as viewer polls, quizzes, features such as “Most Valuable Player of the match” and games. Tweets are brought to air using a lower third or crawl, and viewer participation is facilitated by showing various types of poll results. Templates can provide social info-graphics, such as a visual representation of the number of tweets about different topics, or the number of tweets by different celebrities. With this sophisticated social data, users can show off a program’s social trending and analytics.

To encourage this engagement with content on the first screen, broadcasters can call out to viewers through rich, 3-D, on-screen graphics, as well as through social networks. Depending on the broadcaster’s preference, viewers may participate in these campaigns via SMS, Twitter, Facebook or through a second-screen app such as ConnecTV.

Websites and companion apps on smartphones and tablets are a great opportunity to extend the show’s brand to a new medium. As stated earlier, though, these second-screen graphics need to be just as rich and informative as the viewer is accustomed to seeing on air. Creating them for live television can require an expensive parallel workflow, but if it is done right, this process can be undertaken directly from the existing graphics production tools using the same skills and workflows.

Today’s advanced graphics solutions have evolved to include cloud services, production workflow and graphics tools. In tying the second screen to the first, cloud services provide the infrastructure for connecting to and processing external Web-based social media and second-screen content through secure and managed connections. This layer is used to process data so that it can be accessed easily by the graphics devices on the ground using standard interfaces. The provision of these services from a centrally hosted location is especially useful for station groups or for mobile sports production.

On the ground, a streamlined graphics workflow is critical in making second-screen graphics a seamless part of the production process. For news production, the second screen and social TV platform is being interfaced with news graphics management solutions so that social media content can be linked to templates and brought to air using the same intuitive drag-and-drop user interfaces already used by hundreds of stations. For sports and other live events without a graphics management system, the platform must support live manual playout via the same graphics-creation software that support the first screen product.

With data aggregated by the second screen, and the social TV platform linked to templates and graphical elements with straightforward database scripts, broadcasters can present this information with its own branded look. For facilities working with the most popular graphics systems, the vast number of trained designers and operators ensures that a production team never will be shorthanded when the need arises to generate second-screen content.

A broadcaster can spend weeks and months developing a custom solution that integrates with an existing graphics system with social and second screen technologies. However, both cost and complexity can be radically reduced through the use of a graphics platform that was designed with this interoperability in mind. A standardized solution also means less training needed for operators, faster results and fewer mistakes.

The main requirement of a graphics production platform capable of integrating second screen and social media into live TV broadcasts is that it connects smoothly with the variety of content without the need for significant custom integration. Easy access to tools from top companies working in second-screen environments gives broadcasters a low-cost, low-risk way to introduce engaging and dynamic new elements — Twitter feeds, polls, text messages and other viewer-generated data — into live news and sports programming. Graphics solutions vendors must stand ready and be able to integrate their platforms with other social data providers as required by customers. They must offer second-screen and social-TV platforms that operate transparently with any number of partners and technologies. That number is on a case-by-case basis and depends on the individual needs of the broadcaster or media company.

The new, second-screen landscape has created opportunities through which media companies can increase the value of their services, engage with more viewers and make greater participation possible. Today’s graphics production platforms need to stay in step and offer effective ways for broadcasters to tap into this trend. For creators of news, sports and entertainment programming, this can lead to richer creative content and be the foundation for a stronger, more valuable relationship with individual viewers.