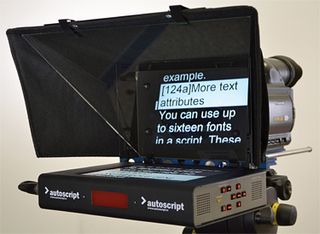 OTTAWA—Teleprompters come in all sizes and price ranges. For $9.99, you can buy a ProPrompter app that runs on your iPhone, or spend under $2,000 for a ProPrompter HDI or a Prompter People Ultralight on-lens system; each of which run on an iPad. Or you can spend tens of thousands for a multi-camera prompter made by Autocue or Autoscript; either of which can be integrated directly into a newsroom automation system such as Avid's iNEWS or AP's ENPS.

Autoscript LE D8TFT "Prompters are one category where you really get what you pay for," says Aaron Brady, Autocue's Americas managing director. "The challenge is to know what you need before you purchase. There's no point in getting a budget system if it doesn't do what you need it to do. Conversely, a fully integrated multi-camera prompting system is overkill for field applications."

In the early days of teleprompting, a paper script was taped together into a long continuous strip, and then captured using a TV camera as it rolled past. The video from the camera was reversed and then fed to a monitor mounted under the camera lens at a 90 degree angle. A clear sheet of glass mounted at 45 degrees to both the lens and monitor—placed over the lens itself—served to reflect the script "right way around" over the lens. The result is that the talent could look at the camera lens and read at the same time.

The advent of computer technology, followed by the evolution of newsroom automation systems such as iNEWS and ENPS, revolutionized teleprompting. The text could now be sent directly from a computer file onto a monitor mounted on the camera. Sophisticated prompting systems were developed that could share this text across multiple camera positions simultaneously, with scrolling speed being controlled by the talent, or a producer off-camera. Better yet, these sophisticated systems could handle last minute story switches; something that just was not possible with a taped-together paper script.

This same technology has also made simplified "field prompting" possible. In fact, whether it is a reporter reading directly into the camera, or the newsroom sending down a script for the anchor to read on location, single-camera mounted prompters driven by laptop computers have become standard ENG issue.

The development of the iPhone and iPad have taken this portability to new heights, and driven prices even lower. "Multiple sync for more than just two iPads seems to be coming," says Peter White, director of sales and marketing of Bodelin Technologies; makers of ProPrompter. "It will make the iPad, as prompter, just as valuable for a multicamera studio shoot as it is for the mobile single camera shoot."

Just as you wouldn't use ENG cameras to shoot an in-studio network newscast, it does not make sense to use field prompting systems for multicamera newsrooms shoots. Fundamentally, they are not optimized for this work, and they lack many of the features offered by a broadcast-quality in-studio prompting suite.

ProPrompter HD I PRO 2 At the same time, it is possible to save money by purchasing high-end prompting software, and then installing lower cost hardware. "For instance, you could purchase an Autocue or Autoscript application that works with iNEWS or ENPS, and then use it over Prompter People's hardware," says Chuck Majewski, Prompter People's sales manager. "Frankly, the software output doesn't care what kind of monitor you are displaying on, as long as it is compatible."

Meanwhile, just because a system is designed for single camera field operations doesn't mean that it should use consumer technology. "One of the most important characteristics needed for field prompting applications is the brightness level," says Greg Prentiss, director of sales for Autoscript. "To put this in perspective, common consumer LCD monitors, such those used for PCs, have a brightness in the 300 nit range. However, for outdoor use Autoscript recommends at least 1000 nits. Our recently released 8-inch high-bright LED8TFT delivers 1700 nits, which is more than enough to keep prompting text clear and legible even under the most challenging daylight conditions." [A nit is a unit of visible light intensity. The more nits of light emitted, the brighter the display.]

Clearly, choosing the right prompter for the job requires careful thought. "You need to first decide how the system is to be used, and under what conditions," Brady says. "Next, you should think about the level of integration and flexibility you want, because this is central to getting a prompting system that meets your actual needs."

Once you have this data, you can shop around. But remember: The goal is not to get the cheapest prompting system, but rather the best value for your money. "Choosing a prompting system based on the specific needs of your business application will help your talent communicate more effectively and make your production run more smoothly," says Prentiss. Knowing which is which is a matter of research, supplemented by side-by-side tests of potential prompting purchases in studio, and in the field.