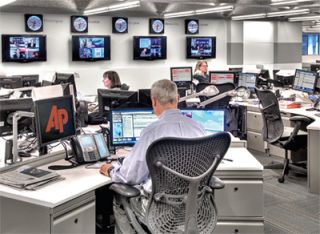 ALEXANDRIA, VA.—Despite a lingering economic downturn, the nationwide buildout of local HD broadcast facilities and accompanying digital infrastructure are proceeding at this stage mostly among medium- and small-market stations. Yet system integrators say they're also busy upgrading television and other video-rich disseminators to take full advantage of the four-screen environment that continues to entrench itself among consumers in mid-2011.

The Associated Press hired PPI to design, engineer and build AP's four-floor 82,000 square-foot Washington Bureau and the Broadcast News Center. "The HD buildout is a tremendous opportunity right now because it's also in context with the repurposing of content," said Jim Hatcher of CTO of Professional Products, Inc. in Gaithersburg, Md. "Not only is there opportunity to take the traditional broadcaster to HD, we can also include a complement of transcoding hardware that allows users to repurpose and republish their content for those four different screens of today," to include DTV sets, PCs, smartphones and tablets.

'With transcoding technology, we're now able to move around very large files and do it very fast. Today transcoding is able to get content out to the [Internet] and to such devices as PDAs in real-time," Hatcher continued. PPI counts the Associated Press, Turner Broadcasting, and the BBC, among its clients.

Joseph Policastro, senior director of Broadcast Integration Services, said today's multiple screens that vary from a couple of inches to several feet in diameter—as well as the moniker "multi-screen digital"—can be open to various interpretations. "In terms of implementing 'multiviewer' displays, most broadcasters at both the station and network levels are cognizant that this has become very prevalent in production control rooms for ingest/playout, and within post-production environments," he said.

Considering relatively new factors such as the increased number of sources, an array of aspect ratios and numerous format variants, Policastro said the "multiviewer engine architecture" with a choice of basic display technologies (i.e., plasma, LCD, LED) has now become a "de-facto" implementation for the typical broadcast-based operation.

"Considering it's also very predominant that the architecture in many conventional routing switchers provides an integrated multiviewer architecture interface without using a large quantity of additional output buses has helped to accelerate this type of realization," he said. "With BIS being a systems integrator, we strongly advocate this multiviewer scenario."

PPI CEO Bruce Kaufmann acknowledges the troubled U.S. economy and a few other factors has prompted some hesitation by local broadcasters when it comes to system integration in the still-young digital age. "The pushback from management and ownership was 'what's my return?' It couldn't have come at a worse time a few years ago when ad revenues were shrinking, among other things. We still have a weakened economy, but so many more things such as [large-capacity files storage] are available today to broadcasters and it's far more cost-effective," Kaufmann said.

Hatcher thinks some of today's broadcasters still require system integration experts to help them make necessary changes during the ongoing metamorphosis within broadcasting and related industries. "And they don't have a lot of time to do it," he said. "But I think a lot of traditional broadcasters have already changed in order to stay relevant in today's society and within a market that's becoming more and more saturated. "There's this consumer-off-the-shelf technology that's been slowly encroaching into the broadcast space—and that threatens purpose-filled hardware from manufacturers. We really see this technology most, perhaps, at the desktop [PC] level."

Policastro said BIS is currently involved in an integration project that eventually will deploy several converging technologies to streamline and provide support for 64 channels of play-to-air automation. His firm is also consulting with several clients that are currently migrating from an analog infrastructure to a more conventional SDI-based scheme: "We're working from a core infrastructure to allow for pockets and islands of phased-upgrade evolution and expansion," said Policastro.

Some system integration projects are purely temporary. Bexel is providing control room facilities for six months for ESPN as the sports network builds a permanent production facility for its Longhorn Network at the University of Texas in Austin. "Since the temporary installation will be in place for several months, environmental issues have taken center stage in the design process," said Bexel Chief Business Development Officer Scott Nardelli.

Scott Nardelli, Chief Business Development Officer for Bexel "Typically in a short-term application, electrical and HVAC are also temporary. Although important, they're usually well-handled by electrical generation and HVAC [heat , ventilation and air conditioning] units provided with the temporary facilities. In this case," Nardelli said, "the temporary facility is a building—so electrical and HVAC have to be upgraded to support the equipment over the extended duration."

Nardelli believes one of the biggest challenges facing broadcasters in systems integration is the effect the conversion from a broadcast to an IT-based infrastructure has on workflow. "Where does broadcast infrastructure end and IT begin? With much of the equipment now sharing data—as opposed to discrete video, audio or control—the line has become blurred," he said. "So broadcast engineering and IT departments are working more closely together to satisfy broadcasters' needs. The challenge is that both departments commonly approach issues from different perspectives, and so to be most effective they're both going to have to learn a shared language."

Policastro thinks another big challenge for broadcasters is anticipating which technology trends will be most appropriate for them in the future. "This encompasses many factors, such as evaluating workflow processes throughout the complete production chain from ingest-through-playout," he said. "For a conventional tapeless environment, for example, it must include major considerations for media storage and media asset management." In terms of audio, he said considerations should include surround-sound applications and adherence to the CALM Act. Important "media distribution conduits" to be considered might include ATSC Mobile DTV, online streaming, traditional terrestrial transmission, and possibly 3DTV, he said.

For one systems integration project that eventually will be on display (literally) for the entire world to see, Nardelli said preliminary designs have been completed for new "event infrastructure" as part of the renovation of Times Square in Manhattan. The project presents several challenges for Bexel—such as finding enough space for power and broadcast cabling panels. "Perhaps the only thing more crowded than the sidewalks of New York is the ground directly below those sidewalks," he said. "Utilities, subway tunnels, electrical vaults and abandoned train systems make finding space for new conduits and systems very hard to come by."