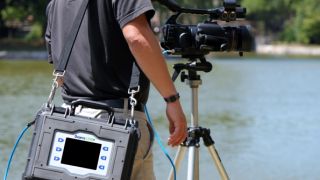 Even though the live video images coming from these systems can sometimes unexpectedly drop off and freeze at times — due to data traffic congestion on public networks — the use of bonded cellular technology to transmit video back to the station is proving it indeed has a place in today’s electronic newsgathering toolbox. It provides perhaps the fastest and most economical way to get close to a news story … and get it first.

Recently, during the Chicago teachers’ strike, the mayor of Chicago announced a hastily put together press conference regarding the status of negotiations. Local TV news crews were given roughly 15 minutes to get to the meeting, set up and start recording.

For stations such as WLS-TV, the local ABC affiliate, it was either send out a single reporter and camera operator with a backpack transmitter that uses live encoding and bonded cellular signals to get the story, or wait for one of the station’s 22 microwave-equipped vehicles to arrive and risk missing the live briefing. The station chose the first option and got there in plenty of time. Unfortunately, other stations in the market chose the same option and soon several of them (using different but similar systems) were plagued with weak signal broadcasts due to the crippling demand on the local AT&T network. It was reported that WLS suffered the worst of it, broadcasting live images that sometimes froze or went black.

As the debate surrounding the reliability of this portable uplink technology continues, companies that market such products are working hard to implement new types of lightweight codecs, bandwidth scaling software and signal multiplexing algorithms to rectify the inherent problems while being careful to explain the limitations and the benefits to customers. And there are a lot of U.S. customers willing to take a chance, as stations seek to put more crews (or one-man-band reporters) on the street in the most cost-effective way. The cost of a cellular transmission package is minimal when compared to buying and/or operating and maintaining a traditional microwave truck.

“We recognize the shortcomings of this technology, and we are continually developing improvements to make it more efficient,” said Bogdan Frusina, chief technology officer at Dejero Labs, in Waterloo, Ontario, Canada, echoing other companies (like LiveU, based in Israel) that make similar technology. Several ABC News O&O stations now deploy more than 50 Dejero LIVE Mobile transmitters across the country. “Due to wireless network limitations, these types of problems will happen. We know that shared bandwidth will not be evenly distributed all the time; it could have been any of the broadcasters [in Chicago] that ended up with the shortage of signal. This is the world of shared cellular. We’re honest with our customers and tell them this is the one risk they will deal with.”

He added that currently there are no quick-fix solutions. Improved transmission success could be forthcoming with the planned widespread deployment of Sprint LTE and T-Mobile LTE service later this year. Other options include connecting with and integrating other encoding and transmission technologies such as KA band satellite, which Dejero successfully demonstrated at the recent IBC convention in Amsterdam.

“There’s a lot of upside to this technology, not only having to do with cost, and stations are beginning to recognize this,” Frusina said. “As the cellular networks add bandwidth, and they continue to, more broadcasters will embrace this as a good option to get the news fast. Regardless of the resolution, stations need compelling content. That’s what this business is all about.”

Understanding ENG professionals’ concerns, some companies are now offering the built-in option to transmit video from the camera using either wireless 4G networks or standard (line-of-sight) microwave link back to a truck parked outside a venue. Integrated Microwave Technologies (IMT), in Mt. Olive, NJ, a long-time developer of digital microwave systems, offers customers the choice to use both technologies depending upon conditions in the field. It’s called the Nucomm Connect Live, a camera-mounted COFDM and multi-4G/LTE live-video HD transmitter.

The Nucomm Connect Live is a camera-mounted COFDM and multi-4G/LTE live-video HD transmitter.

In COFDM mode, the unit covers the 1.9GHz to 2.7GHz frequency band. (It also is available for use in the 5.8GHz nonlicensed band.) For day-to-day news coverage, multiple (“bonded”) 3G/4G links can be used to transport HD video back to the studio in near real­­­ time. Depending on the operator’s specific needs in the field, latency versus video quality can be tuned between three preset modes (interview, balanced and high-quality) via a touchscreen LCD display.

The Connect Live unit uses adaptive encoding and bonding techniques to compensate for changing network conditions by adjusting frame rate, resolution, encoding rates and streaming parameters. It offers a boot-up time of less than 30 seconds, according to the company. Available formats include 480i, 576i, 720p and 1080i. The unit can also be configured to accept composite, HD-SDI and SD-SDI source feeds. Audio capabilities include analog and fully embedded audio.

“Despite all of the current limitations, due to the lack of full wireless bandwidth across the U.S., stations want to utilize this technology because they want their crews to be light on their feet and get the news first,” said John B. Payne IV, chief technology officer at IMT. “We all have to understand that wireless network are improving all the time and will only get better. We at IMT still feel that a combination of cellular network and the old reliable microwave will ensure that a station gets the story it needs, regardless of conditions in the field.”

Lance Hiley, chief marketing officer at Vislink, a UK-based maker of microwave and portable satellite uplink technology for newsgathering, agrees that a combination of technologies is the best strategy. The company has introduced a small KA-band satellite system (which also supports X- and KU-band networks) that can be set up in minutes and augment poor cellular network coverage in remote areas. It also showed a new miniature microwave transmitter that fits inside the body of a Sony HDC 2400 HD camcorder for better weight balance.

Hiley said the emergence of cellular transmission systems has actually helped increase the use of wireless technologies for newsgathering.

“The use of cellular networks gets people comfortable with wireless transmission and that’s good news for those of us selling wireless camera systems,” he said, adding that his company does not offer a cellular option, but can and will once it feels the market is ready for it. “The availability of 3G and 4G networks is not everywhere yet, and there’s a lot of work to be done to stabilize these cellular transmitters, but the industry will get there.”

Paul Shen, CEO of TVU Networks (Mountain View, CA.), said when he first started discussing the technology with stations in the U.S., they didn't have confidence it would work when needed, but a few successful news events helped prove the concept. His company currently has a deal with Gray TV for 35 systems that are now deployed in the field.

“We try to ensure a good experience by working closely with the customer, basically we offer equipment and remote services to monitor the behavior of the system,” Shen said. “We also think that combining microwave and other traditional technologies with cellular is a good recipe for success. You send a single reporter with a cellular backpack system to get the first images from a news scene, and then follow that up with more live interviews using traditional microwave truck. There’s room in this industry for both.”

What’s become clear is that the notion of the backpack cellular transmitter replacing the microwave truck is not yet a practical reality, despite what some equipment vendors in this space might try to convey in their marketing messages, although it could be in the future. Due to current TV station economics, ENG vehicles and the technology used to equip them are getting smaller and more compact.

“There are a lot of advantages that this technology brings and this technology [bonded cellular] is another tool in your tool box,” Dejero’s Frusina said. “It will not replace all microwave trucks, it will not replace all satellite trucks, but it will reduce the number of expensive trucks and provide variety in newsgathering. We know that we are not a truck, but we do a lot of things that a truck can't do.”