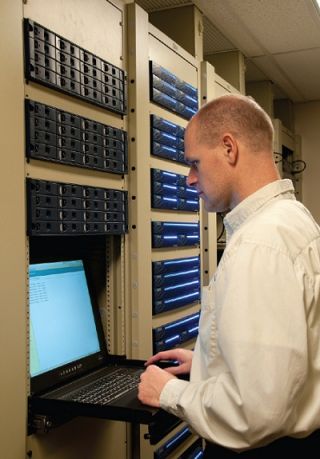 David Gabbitas, broadcast engineer for the LDS Church in Salt Lake City, examines the settings on the organization’s Harmonic-Omneon server. ALEXANDRIA, VA.—There once was a time in the television industry when virtually all recording and playback was done from videotape. If you worked in a facility with automation, this often meant that you had a huge and expensive mechanical wonder that stored, retrieved and played-back videotape cartridges.

Almost comical in the way the components worked together, these robotic automation systems looked like something Woody Allen might stumble out of in the film “Sleeper.” By 2000, the days of such systems were numbered and they are an unlamented part of the many archaic technologies that litter the path of the television industry.

What forced robotic systems into the technology dumpster is the video server, which is going strong today and morphing to fit into an increasing number of niches. In these past few years, video servers have become the beating heart of the television animal—vital to the art and business of television.

“Linear play-out isn’t going away any time soon,” said Mark Cousins, senior product line manager for media servers at Harmonic. “It’s still the product that pays the bills. Today’s servers have been carefully optimized for broadcast operations, and they continue to play a central role in the broadcaster’s primary delivery method and primary source of revenue generation.”

Video servers started out as a way to quickly store and play back video clips, starting with commercials, news stories and other live-production clips. As the cost of storage dropped, broadcasters saved entire programs on their servers and used the server as the primary play-out device.

AUTOMATION TO TITLING
Today, servers are used to ingest, edit and play out every type of video in a professional television facility. In some cases, the server is a “channel-in-a-box” that does everything from automation to titling—all you need to do is connect its output to a cable headend or broadcast transmission chain.

“Traditional servers are the product of decades of highly specialized engineering development … required to meet the demands of cost-effective real-time ingest and play-out, storage, interoperability and, most important, reliability,” Cousins said. “Advances in servers have been possible and affordable thanks to improvements in technology such as higher processing power, increased storage bandwidth and capacity, greater network throughput and lower cost.”

Several companies can trace their current server offerings back to an original product that debuted in the 1990s. Grass Valley is one such company. Its 2013 server product line represents an unbroken development chain dating back to the industry’s first practical video server, the Profile, according to Ed Casaccia, senior director of marketing at Grass Valley. “Since then, [there ’s been] a dramatic increase in internal processing power through adoption of field-programmable gate array technology for both codec implementations and internal effects capability, as well as the adoption of embedded operating systems for both real time frame handling and non-real-time application support roles, and graphics processing unit implementations to bring graphics handing into the video server itself.”

Harmonic, which acquired Omneon and its Spectrum server line not long ago, can point to the Spectrum as a continually developed product since its introduction as well as the company’s new ChannelPort integrated channel playout platform.

“The evolution of the Spectrum family has seen the addition of support for HD, as well as the introduction of integrated storage models, modular hot-pluggable I/O devices and production codec support,” Cousins said. “The launch of the Channel- Port is among the most significant recent developments for the Spectrum family.”

Since video servers are, at their core, specialized computers designed to store and play back video, it’s logical that servers are evolving at the same rapid pace as other types of computer systems.

“From a technology standpoint, processor evolution is probably the most significant factor that both enables and forces improvement,” said James Frantzreb, senior market segment manager for media enterprise at Avid. “Second to that is staying abreast of camera and other codecs, and we’ve also taken advantage of storage capacity and performance advancements, as well as improvements in other components.”

EVS targets its Xedio Flash newsroom server at smaller operations. Xedio Flash is an integrated hardware and software system that includes several NLE seats, ingest codecs, play-out capability and 18 TB of storage— all in one rack.

Grass Valley K2 Summit server and K2 Media Client I/O system Years ago, Harris released its first server, the ASC Virtual Recorder. Since then, the company has seen continuous improvement and expansion of its server line.

“The Virtual Recorder evolved into the VR30, then VR300 and VR400, then into the Nexio server brand that is used by Harris today,” said Andy Warman, senior product marketing manager for Harris Broadcast. “The Nexio line has been with us for about a decade now. Our servers have driven many innovations, including the use of shared storage, dual-drive redundancy long before there was RAID-6 protection, edit-in-place for video server and multi-channel software codecs.”

Constant improvement in computer components plays a big role in the evolution of servers, but perhaps the biggest push for change follows the money. “There are many reasons driving improvements over time,” Warman said, “but it is really customer needs that create change.”

MOVING TO IPTV
Exactly where servers go from here is hard to say. One of the interesting recent developments is the growth of IPTV. At some point, IPTV programming comes from a server, but industry insiders are mixed as to whether this will affect the video server as we know it today.

“Avid is focused on servers for acquisition and playback that supports the production process,” Frantzreb said. “IPTV is a different server application where streams are lower bandwidth, and capacity and cost per stream are key metrics. The goals of IPTV and a production or broadcast transmission server are different enough that you really have to optimize a server for one or the other.”

However, others are thinking about the time when a customer lays out a good case for having an integrated server system that can do it all, including IPTV.

“What has traditionally been perceived as a production chain consisting of preproduction, live program execution, postproduction, multi-purposing, and archive are all converging into what we call ‘total nonlinear production,’” Casaccia said. “The video server, because it sits at the center of encoding and decoding operations, will be the lynchpin of such consolidated workflows in the future, handling many of the functions previously allocated to routing switchers, nonlinear editors, and even production video switchers. In effect, that’s a complete remake of television production into a fully IPTV framework.”

If there is any consensus, it is that servers will continue to do more, and will likely do more for either less money or not much more than they cost now. “Cost is a huge factor, and moving server technology off of ‘hard-metal’ boxes [dedicated cards with hardware decoders] to software-based solutions was a start to cost reduction,” said Todd Robinson, marketing product manager for servers at Ross Video. “The next step is to continue to reduce the cost of hardware by combining broadcast products, such as channel-in-a-box. If you can provide several functions within a single device (video server, graphics and routing), you reduce the hardware cost by eliminating chassis, power supplies, cables and other physical components.”

That’s another way of saying that we should expect more software-driven functions, which is a good thing when it comes to upgrades, codec updates and changing standards requirements.

Of course, there are specialized servers to meet specific requirements. An example would be a sports server, which has functions specific for the needs of sports production. Like other servers, the cost of the components used in sports servers is dropping, at the same time the capability of those components is rising—a situation ripe for continual improvement and feature expansion.

There are still standalone recorders available, including a small number that use magnetic tape. However, servers are the “better mousetrap” when it comes to recording, storage and playback of video, especially in concert with automation and remote control.

The crystal ball might be a little cloudy as to where servers go from here, but they are definitely going someplace interesting.