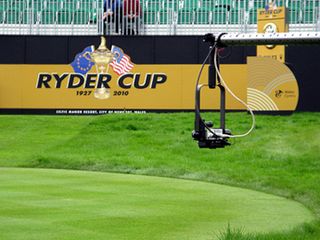 “The 2010 Ryder Cup held at Celtic Manor was covered by BSkyB in 3D using 21 stereoscopic camera rigs,” said Robin Broomfield, BSkyB’s 3D development manager. "One of these rigs was a 3D Polecam supplied by Chris Taber of Pedestal TV. The Polecam was located on the first tee and gave spectacular 3D shots of the crowd in the stands and the players teeing off. This was the first time a 3D Polecam has been used by BSkyB on one of the 3D sport events but has given a new dimension to the otherwise low angles that look so good in 3D.”

“Two Toshiba IK-HD1 cameras were attached to the new Polecam 3D mounting plate,” said Taber. “This allowed easy adjustments of convergence and roll to be made at the head while final adjustments were handled in a Telegenic truck via a Sony 3D convergence unit. The quality of the two Toshibas allowed the pictures to cut in seamlessly with the main cameras, thrilling producers and audiences alike.”

The Ryder Cup event took place between Oct. 1 and 4.