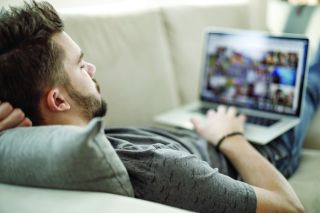 Mirroring cable in its heyday when a new week seemed to correlate with a new cable network, some question the future of the linear model. Then there is the concern in the multitude of choices in today’s streaming market. Will consumers, already potentially frustrated with juggling multiple subscriptions and associated rising cost, reach a breaking point?

Today, over 1,200 OTT services — the universally appealing ones, those in niches and everything in between — are available globally, according to Dan Rayburn, principal analyst, Frost & Sullivan. The estimated number in the United States hovers in the hundreds. Some are distributors, some are syndicators and others are content owners.

Apple TV+ and Disney+ launched this past November. Peacock, NBCUniversal’s entry into the stream arena, and Quibi, a short-form mobile video platform founded by Jeffrey Katzenberg, are coming this month. HBO Max, from WarnerMedia Entertainment, a division of AT&T’s WarnerMedia, is slated to debut in May.

Mark Donnigan, vice president of marketing at Beamr, sees a different “war” of sorts brewing. “I think this so-called ‘war’ is within the content producers, not the streamers,” he said. “It is amazing how much work, human effort, talent and specialized skill goes into making original content, whether it is episodic or film, even sports production. For them, right now, it is a great time to be in Hollywood. For the end-user, the depth of content being produced only accentuates the value of these new streamers.

“I remember when there was a concern that too much non-scripted programming would eventually replace scripted options,” he said. “So, shouldn’t the rising number of OTT platforms with more opportunities for all kinds of scripted content be welcomed? And didn’t the linear broadcasters survive the glut of new cable outlets way back when?”

“A surprising development, and one that is just really notable,” said Jeff Gilbert, vice president of strategy, Qwilt, “is how the connected devices, and even the TV operating systems, have garnered a much greater share of viewership on streaming services than I think anyone expected.” Qwilt, a self-described “Uber,” offers new business models for content delivery. “A common initial thought was that everyone was going to watch the streaming services on their phones. But most of the volume they were seeing was on their Roku or their Apple TV, or whatever else, on a big screen. And this only accelerated the OTT content model and made it more viable.”

LINEAR IS NOT GOING AWAY

“Linear is still the place to go for live programming and for sports, and that is not going to change,” said Rayburn. “Major sports are still going to stay on traditional TV distribution because those are the platforms that have the money to pay for it. And while many are waiting for the digital bubble to burst, look at the caliber of the companies behind these services … Google, Amazon, Apple, AT&T, Disney and others. These are not companies that have to make the vast majority of their revenue from these services. These services are a complement to other products and services.”

“I think there is more drama over mechanism of delivery than there should be,” said Gilbert. “At the end of the day, I think people want to simply see stuff. What might be challenging for the end-user is going from getting the same suite of channels, whether they subscribed to Dish, DirecTV or Comcast, or whoever, to this new era of figuring out what each service offers content-wise. Streaming services have placed the burden of content search much more on the end user,” he said. “Maybe that is sort of where this ‘war’ is going on.”