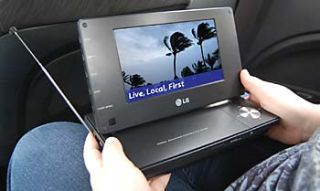 LAS VEGAS: Two-thirds of all U.S. TV households will have access to Mobile DTV within 12 months. That’s what the Open Mobile Video Coalition said today. The group said the service is on track to reach 71 million households by next April.

“Between those stations already on-air and those who are coming soon, we project that Mobile DTV will reach more than 71 million households--or more than two-thirds of all viewers in America--in the next 12 months,” said Anne Schelle, OMVC executive director.

The OMVC and other mobile digital TV groups are gearing up for the 2011 NAB Show, kicking off Monday in Las Vegas. Schelle said equipment makers will be showcasing new receivers for the service at the Mobile DTV Pavilion in the Las Vegas Convention Center’s North Hall. Among them, the new Valups Tivizen receiver for the iPhone and the iPad; the Clydle iPhone cradle receiver; and portable WiFi devices from Crestech. RCA will also have a new line of portable Mobile DTV sets on hand, and Winegard will display its in-vehicle system.

“We’ll have prototype cell phones from LG Electronics and Samsung as well as Dell’s prototype netbook computer with built-in Mobile DTV, plus a variety of USB receivers for laptops on hand from manufacturers such as DTVinteractive, Hauppauge and Pixtree,” she said.

Broadcasters started seriously considering mobile service as the digital transition came to a close. The OMVC was formed in 2007, and one of the first orders of business was getting a transmission standard established. The Advanced Television Systems Committee did so in October of 2009 with the adoption of ATSC M/H. The standard made it relatively easy for broadcasters to add the format to existing operations. WRAL-TV in Raleigh, N.C., had already become the first station to launch mobile service, going up on public transportation in April 2009.

Many more launches were predicted through 2009-10, but the wait for a standard and the absence of receivers, compounded by an regulatory Catch-22, slowed progress. The deployment of Mobile DTV now appears to be on track. According to the OMVC’s count, at least 150 stations will be transmitting ATSC M/H signals by the end of this year.

These uses will be on display at the NAB Show, along with “Tweet-TV,” a social media application for ATSC M/H, he said. The Mobile DTV Pavilion is being co-hosted by the OMVC, the ATSC and the National Association of Broadcasters. The Mobile500 Alliance and Mobile Content Venture--two advocacy groups announced last April--will also have a presence at the Pavilion. The 2011 NAB Show runs through April 14.
~ Deborah D. McAdams