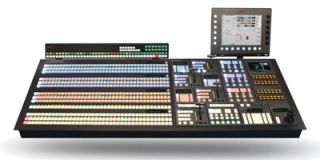 There's a lot of discussion about 4K--also known in the broadcast and consumer electronics worlds as UHDTV--production and whether it is practical for broadcasters to distribute 4K signals--it requires four times the bandwidth of current 1.5 Gbps infrastructures to get into the home. Broadcasters covering live events have utilized the technology as part of an overall HD sports telecast in order to provide viewers with captivating high-resolution, slow-motion replays and critical analysis of disputed plays.

With little demand from consumers for UHDTV sets, however, it might take a while before we see activity in this space at the local OTA station level. Indeed, with 4K content now available on YouTube, it's entirely possible that viewers will be watching UHDTV content via the Internet well before it can become a viable broadcast standard.

While high-resolution cameras, servers and encoders are now all readily available to produce such UHDTV projects, production switchers that support 4K natively have lagged behind, due to limited demand... until now.

At this year's NAB Show, a number of companies will show new products that allow the switching of multiple 4K sources. The resulting production can then be distributed as either a single 3840 x 2160 image or a quad link (Quad Full HD, or QFHD, which is four separate HD images sent separately and then stitched together at the TV set).

Companies that offer HD video production switchers understand the current limitations and are taking a cautious approach with customers, admitting that such bandwidth-intensive signals are tough to handle with current infrastructures. These manufacturers include Blackmagic Design, FOR-A, Grass Valley, Ross Video, Snell and Sony-- all are working to develop single link methods of transporting UHDTV signals.

What is UHDTV?
According to Nigel Spratling, Marketing Product Manager for Communications, Switchers at Ross Video, these R&D activities include incorporating 4:1 compression schemes that would allow transport via conventional copper infrastructure, although this adds latency and additional processing requirements, and uncompressed transport via fiber optic link. In both scenarios, no standard has yet been established and thus current live UHDTV productions have used quad link transport techniques via existing 1080P 3Gbps interfaces.

"The problem is identifying what is 4K," Spratling said. "Yes, there are cameras and other pieces of gear available today in the market, but what version of 4K are they? What are the frame rates and how do they interconnect? Also, when you delve into how to create a production system beyond ISO capture and post-production tools, [how best to address UHDTV broadcasts] is very uncertain at the moment."

In addition, the current technique employed to manage signal switching, keying and layering is to combine the processing blocks of 4 MEs to create 1 ME in UHDTV. Therefore, a 4 ME 96x48 production switcher becomes a 1ME 24x12 UHDTV switcher. However, some quad link formats make it possible to also use a single link quadrant from a UHDTV input in another ME that is switching 1080p native signals.

"There is no doubt that a number of early adopters will implement this method of 4K production," Spratling said, "however until the industry develops simplified interconnection techniques, UHDTV will remain in the future for mainstream television applications."

Blackmagic Design began shipping the 1 RU high ATEM 1 M/E Production Studio 4K in the fall of 2013, and the ATEM Production Studio 4K in the summer of 2013. The 1 M/E version provides 4K switching through the use of 10 independent 6G-SDI inputs, each with frame sync. It also comes with built-in DVE with zoom, scale and rotate, four upstream chroma keyers, three independent aux outputs with front panel control, and a larger media pool that holds both still frame graphics as well as motion video clips.

The Blackmagic ATEM 1 M/E Production Studio 4K switcher costs $2,500. "We use 6G-SDI to connect Ultra-HD inputs to our products," Caniglia said. "This new transfer protocol will let a director move between SD, HD and 4K all on the same BNC cable. You can run in 6 Gb/s and then switch them to 270 Mb/s standard definition speeds, 1.5 Gb/s regular HD-SDI speeds or 3 Gb/s 3G-SDI speeds. Broadcasters can build a system to switch from HD to 4K and back with different media with a couple of mouse clicks."

FOR-A's HVS-4000 Series of multi format switchers offer HD/SD mixed input and 3 Gbps support. Grass Valley is a name that has become synonymous with live production and at the NAB Show the company will show its Kayenne and Karrera switchers, which can now both support UHDTV productions.

Greg Huttie, Director, Product Marketing-Switchers, at Grass Valley, said that since the "K-Frame" of both models can natively process 1080p signals, "producing UHD/4K from 4-wire 1080p signals is clean."

The biggest challenge in designing a 4K switcher, he said, "is to make sure it can be easily incorporated into the customer's current system without the added burden of purchasing hardware, loading special software, or changing the production look and feel. Utilizing our DoubleTake feature—as well as Bus linking, key chaining and other functionality developed for 3D productions—helps to overcome any of the challenges of handling four times the resolution of HD."

Snell will show its Kahuna 360, which offers concurrent multi-format operation, thus allowing SD, HD, 1080p, and even 4K sources to be used seamlessly within the same production and deliver multiple output formats of SD, HD, 1080p, and 4K. The company's proprietary "MakeM/E" technology allows switcher resources to be shared among multiple M/Es and output either as 4K, HD, or both simultaneously in a parallel workflow. The company said that broadcasters can then output an HD signal for broadcast, as well as a 4K signal for a projector or other distribution target. Existing functionality such as color correction may be applied just as readily to 4K signals as to HD inputs or outputs.

"The challenge in designing a 4K switcher is to ensure unrestricted format handling capabilities on all inputs and outputs," said John Carter, Senior Product Manager for switchers at Snell. "At Snell, this wasn't a problem as our FormatFusion3 technology was already equipped to do this.4K is resource-intensive when comparing the way workflows are understood today. Consideration must be given to what resources are required to produce a 4K television production or 4K element within a production. Also, we know that any deployed 4K production system will be required still to operate in HD at times during a transition phase. And, of course, while the supporting technology and resources need to increase, at the center of our thoughts are the operators who still have to work within the 4K domain. A means of control must be transparent and not deviate because the format is four times larger than what is mainstream today."

Sony will show its MVS-8000X HD production switcher, which is fully 4K compatible. In fact, the switcher has been used on a number of live 4K productions, including a Paul McCartney concert in Tokyo last fall and at various sporting events.

"Sony's MVS-8000X supports the 60P UHDTV format," said Glenn Hill, Senior Engineering Product Manager, Sony Electronics. "It also supports both the Square Division format [quad link] and 2 Sample Interleave [side-by-side or upper and lower] format, to give our professional customers more flexibility in terms of how they need to work. All connections use 4 3Gbps signals per source."

The Sony MVS-8000x production switcher has been used for several 4K live sports productions. The biggest challenge to designing a 4K switcher, according to Hill, is the ability to maintain the same switcher capabilities—such as I/O, number of mix effects banks, and the number of keyers—found on today's HD models. "This is due to available technology support for 12 Gbps of data and the increased bandwidth of 4K signals," he said.

Where's the Demand?
Most manufacturers agree that there is interest from the broadcast industry, but only at the network level and those producers doing high-profile events, specifically sports. However, there are many AV staging and digital signage applications now being pursued.

"We are seeing very fast growth in the AV and live event/live production spaces right now, and broadcasters are quickly following suit," Blackmagic's Caniglia said. "Sports production in particular is moving into 4K, and we are seeing online content providers, such as Netflix, pushing 4K production for long form content."

Sony's Hill said they are seeing interest from entertainment producers, for mastering of events, sports (for acquisition to provide highest quality replays), TV production studios for on-set displays and projection walls, as well as corporate events where users need to provide the highest quality for IMAG screens.

What's clear in talking to these companies is that UHDTV in the broadcast industry is not yet ready for primetime. There's too much investment that needs to be made in infrastructure and other production equipment and no return to justify it. Additionally, consumers have not embraced the new 4K TV sets as much as consumer electronics manufacturers would like.

"It is very early yet and only the very brave are taking the plunge," Ross' Spratling said. "There will be a lot to learn on all sides."