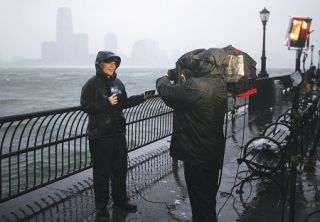 NEW YORK—Backpack mounted cellular live shot systems have become one of the workhorses of television news, with the buildout of 4G smartphone data service in major population centers allowing journalists to go live without the bulk, set-up time, need for line-of-sight and other limitations of microwave and satellite gear. Bonded cellular backpacks gang multiple cellular data connections into a bandwidth path sufficient to carry high-quality television video back to the news studio.

Hurricane Sandy proved to be a major test of the bonded cellular technology, and according to a group of electronic journalists covering the storm, the gear got a more than passing grade.

“I would say it worked like I expected it to, like it should, and I was very happy about that,” said CNN New York bureau chief Darius Walker. “What really helped with the backpacks is redundancy, to have the cards of different mobile carriers… ‘varietal redundancy’ is what I call it, a good variety of possible signals… power may be down for this company, a tower may be up for another company, so that helped out a lot.”

WHAT DIFFERENCE A DECADE MAKES
He noted that CNN deployed more than just the bonded cellular systems in its Sandy coverage. “It was interesting in this situation where we used almost all of the tools available. You name it: we were streaming material, we were FTP-ing material, we would bring it up on satellite, backpacks, flyaways, microwave; we used it all. It was tough, but [this panoply of technology] made it more possible than it would have if this had happened 10 years ago.”

Each live shot technology had its plusses and minuses, according to Walker. “We had some microwave issues because of the wind blowing down some microwave towers here in the city,” he said. The dishes for both satellite trucks and fly-away satellite transmission gear had to be protected from wind gusts during the height of the storm. And then “are we in position to see a certain satellite because generally, in a city, certain buildings will block it. That’s why you have all these different types of technology, so that if one doesn’t work the other does, when one comes up the other might go down.”

The storm was particularly felt on exposed Rhode Island, home of WPRI-TV, the Providence CBS affiliate owned by LIN Media. “Our TVU backpacks worked amazingly well,” said station director of engineering Bill Hague. “I was surprised. We had one backpack down in Pettaquamscutt on the southern tip of Rhode Island. We only had 3G connection, but it definitely worked well and we had no issues there. They were able to feed tape and do liveshots without any issues.

WPRI photojournalist Johnny Villella prepares his TVUPack for deployment. “I had anticipated having problems with them, and I told the news director we’d do our best and see what happens,” he added. “But amazingly I had 31 [successful] backpack shots.”

He said WPRI also used its terrestrial microwave equipment, with a pair of trucks that were HD capable and two more handling SD 16:9 images. “Microwave shots came from all different parts of the state, including from downtown Narragansett, which took the brunt of the storm,” he said. “We had to play the wind game with the microwave mast: put the mast up, bring it down. You had to do that all through the storm until… we’d go up, do a live hit or a tape feed, and get the mast back down. We tried to park in locations where we were shielded from the wind, on the lee side of the buildings… there were two locations where we could get away with only putting the mast half way up.”

SANDY’S IMPACT
Joe Truncale, vice president of operations and engineering at NY1 has been with the Time Warner Cable network for about 20 years. “Obviously, after 9/11, this is #2,” he said, referring to Sandy’s impact on local news.

“We had a combination of uplink trucks, satellite/microwave vehicles, plus Dejero [bonded cellular systems]. We had trucks at set locations, in the Rockaways, Staten Island, and then we’ve got the Dejeros that are traveling around, covering press conferences. We had one in a guy’s house in the Rockaways, tracking the storm from the beginning… we’ve had a lot of success with our coverage from the field.”

Of the cellular units, he said: “There were obviously times and locations where it didn’t work well… but under the circumstances we’ve enhanced our coverage using these devices. And it certainly resonates with the viewers, we’ve got tons of viewer mail that’s really supportive of what our coverage is, what we’re trying to provide here, the service for the communities.”

Rain-fade is often a negative factor for satellite uplink operations during storms, but Truncale said they lucked out. “It wasn’t the torrential rain, it was a misty rain,” he said. “It wasn’t inches of rain, that’s what was so weird about the storm. It was a big surge, and a lot of wind, high winds. With our microwave gear, when the high winds hit certain areas, obviously the masts came down.”

EXPERIENCE PAYS OFF
While hurricane coverage might be a once-in-a-career occurrence for ENG crews and reporters in New York, New Jersey and surrounding states, Dave Sirak, news operations manager at WFTV, the Cox-owned ABC affiliate in Orlando, Fla., calls his home state a “kind of a hurricane test area.” His two-man crew boarded a plane for New York with a cellular backpack in their checked luggage, and rented a car on arrival. That car’s electrical system was key to WFTV’s live shot operation during and after the storm.

“The three things we had to keep alive were: the LiveU needed to be charged, the laptop needed to be running, and then we needed to keep our iPhones alive for IFB. The cellphone coverage held up throughout the entire storm,” he said, noting that the cell service only began diminishing the day after the storm’s landfall.

With fuel very much on CNN’s mind— especially after Hurricane Katrina—the cable network maintains a fuel truck at its Atlanta headquarters. “At the first sign of how big this storm was going to be, we asked it to come up so our vehicles could get fuel,” said CNN’s Walker. Though the truck carries both diesel and unleaded gas, its capacity is still finite. “We sort of rationed our own gas,” to keep all their vehicles operating.

A small caveat regarding the bonded cellular technology’s effectiveness during the storm: WFTV’s Sirak has a theory about why cellphone airwaves were so available for Sandy’s backpack live shot operation. “New Yorkers are very cellphone-dependent, but they had no way to charge their phones once the power went out. So we were basically provided with the entire cellphone band network, all to ourselves. We probably had some of the best connections we’ve ever had during landfall, which really surprised me.”