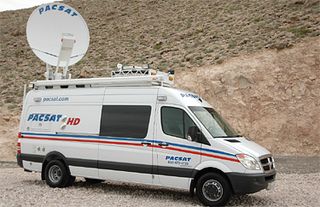 ALEXANDRIA, VA.
Can the 'net cloud be trusted to ship critical data in real time, and at a data rate suitable for HD video?

If purchasers of satellite uplink trucks are to be believed, they have put their money where their feedhorns are and bought new satellite trucks, according to several of the manufacturers of mobile uplink vehicles.

The PACSAT Sprinter, built by Frontline, has a C/Ku-band 2.4-meter dish. The Internet is certainly useful and is a great way to ship files when there's enough time. However, when a remote broadcast must get through without a glitch, satellites (and their cousin, terrestrial microwave systems) are the technology of choice in 2010.

"While a major programming event from a fixed location may benefit from high bandwidth IP connectivity, you will still find an alternate satellite uplink path to the network," said Chris Taylor, key accounts salesman for the Wolf Coach division of L-3 Communications ESSCO. "Satellite is still needed for redundancy—to lose a live event by an IP contribution path failure is still too costly to risk with programming rights and advertisers today."

L-3/Wolf Coach just completed an uplink truck for CBS News in Washington, a location well served by high-bandwidth Internet connections. Taylor said that broadcasters need trucks that can get out there fast, set up quickly and deliver top quality.

"The CBS truck is a Wolf Coach Sprinter satellite mobile unit with redundant MPEG-4 HD, DVB-S2 encoding and RF system," he said. "The benefit to viewers is that crews concentrate on the story, not the technology of covering it."

Taylor said that the latest MPEG-4 encoders deliver the quality networks demand, and the format has stabilized to the point where an investment today won't be obsolete in a few months.

"The transition to MPEG-4 HD is being supported with smaller dish sizes and less-expensive vehicle platforms, which are replacing many older 2.4-meter vehicles," Taylor said. "Broadcasters have been waiting for MPEG-4 HD encoder technology to stabilize before making investments, as MPEG-2 HD encoding products have reached the end of development and any future enhancements will likely not be forthcoming."

"We are not necessarily seeing a mass exodus to smaller vehicles," said Jack Vines, Jr., managing partner at St. Louis-based Television Engineering Corp. (TEC). "I would say that we are still building more Ford E350 and Mercedes Sprinters than we are smaller trucks of any kind."

Vines said that stations are looking for a mobile office as well as an uplink facility.

"They like stand-up height and headroom, and they want a place where they can edit comfortably as well as a place for talent to either warm up or cool down, depending on the climate," he said. "This is always tight on smaller trucks so many opt for something larger, such as a van or Sprinter."

Like employers everywhere, stations are interested in doing more with less. With this in mind, Vines is seeing an increasing interest in automating as much of the operation of an uplink truck as possible.

"There is a perfect storm brewing at TV stations where they have less budget, lower operator skill level [or are training photographers to operate the satellite truck], as well as rising maintenance and liability costs due to masts and generators," he said. "The Holy Grail for stations is the ability to streamline newsgathering operations by having a photographer operate the truck in a very simple fashion: The antenna controller automatically locates the satellite each time, a modem shakes hands with the satellite hub and sets power levels. There really isn't much the operator can do except press buttons to initiate these steps."

TEC has wrapped this technology into a truck the company calls "Evolution." An Evolution truck contains the company's highly automated interface, a simple uplink system that uses a block up-converter (BUC) and a mast-less terrestrial microwave transmitter in addition to a satellite system. The absence of a mast—coupled with an under-hood generator in place of an on-board generator—reduces maintenance cost and liabilities that existed with generator fumes and masts.

Although broadcasters have had a rough couple of years, the builders of uplink trucks seem to have weathered the storm fairly well. One reason is that these same companies build command/control trucks for law enforcement and homeland security, and that market has done well the past few years.

TEC built this uplink van for WMAQ in Chicago. Clearwater, Fla.-based Frontline Communications has seen business stay steady in the past couple of years.

"Despite the economy, some satellite truck operator businesses continue to grow," said Gary Britt, director of sales engineering for Frontline Communications. "It's driven by breaking news and sports, whose markets continue to grow through expanded programming and new newsgathering organizations."

Frontline recently built two uplink trucks on a bus chassis—one for CNN and another for ESPN.

"A bus was used to allow room for a mobile studio in addition to the uplink capability," Britt said. "CNN used their bus for the 2008 elections and ESPN used theirs for the 2009 college football season."

Britt said that both organizations were pleased with the operation of their bus uplink studios and Frontline has fielded inquiries for similar platforms. Britt also pointed out that broadcasters and production companies often have different requirements for uplink trucks.

"Ford vans and Sprinter vans seem to be the favorite for local TV stations," he said. "The independent contractors and networks seem to be more interested in larger platforms—they have to carry a lot of equipment and need room for the crews to get out of the weather."

Like the other truck builders, Britt thinks that the Internet is not yet ready for prime time as a path to reliably carry high-data-rate television programming.

"The improving Internet hasn't really changed the need for satellite uplinking yet," he said. "The quality and reliability of the Internet are just not at the level broadcasters require."

Although each truck builder sees the industry through a lens provided by its clients, some trends seem obvious. For example, there are good reasons why uplink trucks still have decent elbow room, despite the shrinking size of the equipment.

As for the Internet cloud as a path for real-time HD video, it's just not there yet. The Internet is brilliant for transporting files in non-critical time but the reliability doesn't exist to transport glitch-free broadcast-quality HD video.

For that, there are satellite trucks.