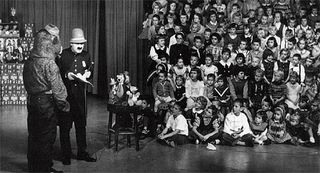 SAN FRANCISCO: Treasures that need to be preserved are out there. Just ask Daniel Henry, who recently found himself transported into a noisy, jubilant television studio of the 1960s where pony-tailed little girls in swinging gingham dresses and five-year-old boys in crew cuts sat for a live taping of a children's television show in Minnesota. As a recording operator for the Minnesota Museum of Broadcasting, Henry finds himself surrounded by mini portals into history—audio postcard recordings to servicemen in the 1930s, wire recordings from before. All of them recorded on various snippets of bygone media: flexible records, 16mm film, Betacam tapes.

Today’s technology is helping bring pieces of history back to life, including the children’s program “Clancy & Co.,” which aired in Minnesota in the 1950s and 60s. All needing to be gently coaxed out of their decades-long home and rerecorded on a media that will be here 100 years from now. But what?

"It seems like no one knows what to do at the minute," said Henry, whose work not only puts him at a clear intersection between old technology and new, but reinforces the digital media industry's longstanding need to find a solid, long-term solution for the preservation of its media.

SO MUCH MEDIA, SO MUCH TO PRESERVE

The rampant changing of standards and constant proliferation of media is currently pushing the industry to more carefully consider how they go about saving and preserving the media that's captured in the field and the studio.

Recent activity in storage format standards is offering different paths for the industry to consider. SMPTE has continued to work with an outside developer on the Archive eXchange Format, known as AXF, an open digital storage format designed to improve interoperability between systems. The format works as a container to wrap up files and allow those new generic files to be stored, transported and preserved on different systems. The push behind the development, says the standard's developer, is the industry's need for a long-term preservation format.

"Now with AXF, when we ship a data tape to a customer, they don't need to have a full-blown archive system; they can use the AXF utility to use as a file-based exchange system," said Brian Campanotti, CTO of Front Porch Digital and one of the architects behind the AXF standard.

The AXF standard is playing a key role in the development of the newest generation of the company's DIVArchive solution. According to Campanotti, since the standard works like a wrapper to contain the entire file that's to be stored, all the complexities and limitations wrapped inside the storage technology and operating system are avoided.

SMPTE has yet to cement the standard, but "we're hoping that it will be accepted and ratified sometime this year," he said.

There is also longstanding support for other archiving formats, such as TAR and linear tape-open or LTO. Regardless of the preferred standard, there's a collective sense that the best option is an open, ubiquitous format that makes data storage relatively simple. "What I think is most important is that we have open formats on our media that are ubiquitous and make tape easy to use," said Mark Ostlund, vice president of sales and marketing for Cache-A, a Morgan Hill, Calif.-based company whose technology relies on linear tape film system archiving technology.

Cache-A ProCache5 LTO Data Tape Deck What is clear, according to industry sources, is that the need for reliable and long-term data storage is reaching an apex.

"We're seeing it a lot more now," said Paola Hobson, senior product manager at Snell about the growing interest in long-term storage. "One is cost reduction: it's a lot cheaper to reuse content that you own than to reshoot new content," noting some recently unearthed Antarctica content owned by the BBC—a once-in-a-lifetime on-location shot from the frozen pole—with its series of stunning, exquisite images. "When are you ever going to get that again?" Plus, with the proliferation of HD, "a lot of people are looking at repurposing SD favorites, or rescanning files in HD," she said.

Another problem can arise when a station gets back to the studio, pulls out the media and finds a discouraging mess. "You go back and look and you see dirt, noise, dust and instability [on that media]. Now all of a sudden you can't use it," Hobson said. As a result, Snell has seen a spike in interest in its Archangel and Alchemist conversion and restoration technology, which is able to retouch media imperfections and remove defects, particularly when converting SD-quality material to HD. "Say you are a sport broadcaster with a sport archive into the 1950s, and you decide to pull together a box set, and once you go back and look at the archive, you see it's covered in scratches, dirt and is wobbling and unstable," she said. That's one piece of the puzzle that Snell is hoping to resolve. "[We provide] the equipment for when you're ready to try and use your archived material to reuse it and repurpose it, whether for content restoration or content conversion."

Preservation isn't a trend limited to North America or to Europe, she said, but is growing worldwide. "It's ether broadcasters themselves with a lot of material or post houses doing jobs for others," Hobson said. "Anyone who has a lot of content; with HD services going around the world, it doesn't seem to matter lately."

The industry is also experimenting with storage in the cloud. Though there have been concerns about reliability and security when it comes to cloud-type archiving, some are experimenting with cloud-type access of files with simultaneous back-end data tape archive, which can be a more cost-effective way for customers to store large amounts of content in a hosted environment.

"For a content owner to invest in a large storage infrastructure, it's a large upfront capital investment," Campanotti said. "With a hosted solution, you can set it up a pay-as-you-go basis to connect into a customer's facility, give Web access as they want it, and restore and retrieve files as needed."

In addition to interest in cloud-based systems, a majority of the industry still rely on massive robotic systems to handle very large media libraries. Many broadcasters rely on LTO data tape storage as a backroom staple because it's familiar, solid and dependable. "LTO data tape fits into the workflow for digital media professionals," Cache-A's Ostlund said. The manufacturer builds networked archive applications like the Pro-Cache5, a rackmountable, desktop and portable solution that can be used to control robotic libraries. Solutions from Cache-A are used by networks such as Fox Sports for their regional sports facilities.

"The interest in archiving is escalating, if anything," Ostlund said. "It used to be if you had a piece of media, it would sit on the shelf in a vault and be preserved for 25 to 100 years. Now many are moving toward digital flash-based media directly from the camera—that means there's no longer source material to simply archive on the shelf." And that's not a good idea, he said. Once it's gone, it's gone forever.

In Ostlund's mind, data tape is the answer to long-term preservation of media assets. "These new open standards can make it much easier to use data tape as well as give confidence [that you can] access content in the future, even if you change your storage system.

"What we see happening is the market is getting educated to the fact that data tape is the answer to long-term preservation of media assets," he said. "These new open standards can make it much easier to use data tape as well as give confidence [that they can] access content in the future, even if they change out their system."