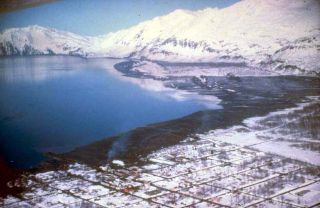 (Image above shows Valdez, Alaska, after the 1964 earthquake and tsunami that ripped away nearly 200 meters of coastline. Photo from the U.S. Department of the Interior.)

ANCHORAGE, ALASKA: Wednesday’s first-ever test of the nation’s presidential alert system revealed a few flaws, KTUU-TV reports. The system was activated across the state of Alaska at 10 a.m. local time.

Similar to the Emergency Alert System used for severe weather notifications and Amber Alerts, the president’s messages are distributed via a specific code, the EAN--Emergency Action Notification. The EAS was developed during the Cold War to warn the public in the event of a nuclear attack or other impending disaster. EAN was added in 1995. No president has ever activated the system.

The Anchorage NBC affiliate said some stations didn’t receive the emergency code signal at all, while others received it more than once. Bryan Fisher of Alaska’s Homeland Security agency told KTUU that officials “found a few anomalies with equipment and programming, as expected.”

Fisher said many of the Emergency Alert System encoder and/or decoder units in stations throughout the state were installed 15 years ago, and some have never been activated.

“We had some reports of the equipment rebooting when it received the message. That’s a known issue,” he told KTUU.

Radio and TV stations and cable operations throughout Alaska participated. NPR affiliate KSKA-FM was among those stations that apparently carried the message twice. Gary Timm, broadcast chairman of the Wisconsin State Emergency Communications Committee, was streaming KSKA during the alert. Writing in the SBE-EAS Exchange Digest, Timm said 10 seconds after the NPR news had started, the EAS code ran.

“A somewhat thin, but completely intelligible, voice announced something like... ‘This is the FEMA Operations Center. Standby for the presidential communications officer... Test... test... test... This is a test of the Emergency Alert System. The message you are hearing is part of a live code test of national Emergency Alert System capabilities limited to the state of Alaska only. This test message has been initiated by National Alert and Warning authorities in coordination with State of Alaska authorities and broadcasters in your area. If this had been an actual emergency, the attention signal you just heard would have been followed by official information or instructions.’”

Timm said the message was repeated several times before its conclusion was announced as of 14:05 hours and the End of Message code was sent.

“This alert took three minutes, 20 seconds from Header Code start to EOM. Then 15 seconds later, the Header Code ran again. It was followed by an entire repeat of the alert, with very noisy audio. That alert was obviously received on an EAS receiver and relayed. The audio was quite poor quality. That alert took 3 minutes, 45 seconds. KSKA then returned to normal programming,” he said.

The FCC and the Federal Emergency Management Agency, along with the government of Alaska and the state’s broadcasters and cable operators, coordinated the test. The FCC suspended enforcement actions against participants who failed the test. Officials for Alaska Homeland Security told KTUU they would be correcting problems in the system in the weeks to come.