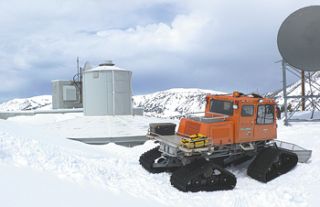 SEATTLE "We were traversing across about a 60-degree slope in the snowcat, and the snow was beginning to avalanche below us. We were going uphill about the same speed that we were going downhill, we were like an airplane crabbing in the wind."

According to Sprint-Nextel, when installers arrived at the peak of Slide Mountain, home to a number of Reno, Nev. BAS license towers, in late May, "what they found surprised even the veterans on the BAS transition team: buildings, towers and cable troughs were all buried in ten-foot deep packs of snow and ice." HSE is handling BAS 2 GHz relocation installation work for stations in Denver, Colorado Springs and Pueblo. Though the market was scheduled to cutover to the new, narrowed BAS channels in September, Hellyer figures they'll be lucky to accomplish that a month later.

At presstime, the digital BAS gear was still arriving at the stations, (see "Staying On Schedule," page 26). In the case of Denver's Fox affiliate KDVR, Hellyer said the shipping date for the last pieces of BAS gear for installation on Almagre Mountain is estimated for mid-October.

"The antenna's on top of a 60-foot tower," Hellyer said. "Once the weather gets bad, the snow comes in, that's not going to be serviced. If it shuts down, we don't go to that site [again] before mid-June."

Almagre isn't the only tall peak in Colorado used by stations for BAS operations. Hellyer said there has already been some snow in Colorado's Front Range. "If we have a major storm come through, say 10 inches of snow up there, we're done for the winter," he said. "Hopefully it won't be that way."

Though summer is the most desirable time to complete communications equipment installation and maintenance at these mountaintop sites, it is possible to complete work during periods of the fall and spring, at a price.

"In Colorado we generally say to our customers, in the fall and spring of the year, once the roads are somewhat passable, with four-wheel drive and chains, that you can usually double to triple the cost of an installation under those conditions," said Hellyer.

HOUSTON
As Hurricane Ike bore down on Houston last month, the good news was that engineers at stations in television's ninth largest market had lots of advance warning. The bad news was that they couldn't do much about it.

Houston was one of the first large markets to complete its Broadcast Auxiliary Service 2 GHz retune, doing so in March of this year.

"Damage was about what you would have expected," said a source at one station, permitted to speak only on background. "Covers on gear got blown away, and there was lots of wind damage. The higher up the equipment, the harder the wind blew."

He said that one station's receive antenna was blown from the rooftop of one of the city's skyscrapers onto another. All of the market's stations had similar problems, including rainwater damaging circuit boards within equipment. All but one of his station's receive sites suffered damage.

Our source knew of no receive sites at Galveston, the coastal island city that suffered heavy damage. "It's so flat between Galveston and Houston that an ENG truck there can hit a receive site on a building here," he said.

The days of advance warning that Houston laid in Ike's path did allow stations to line up backup and spare parts from suppliers and sister stations in other markets. The airport was open for business the next day and overnight shipments of gear arrived right away.

ENG crews concentrated on what they could do, not what they couldn't. In a survey of one, our source said from the coverage his station and the competition provided, viewers couldn't tell that receive equipment was down or damaged.

In addition to the extra time spent getting to and from the sites, he pointed to the shorter period of sunlight as well as the difficulty riggers have performing their tasks while wearing heavy gloves and other winter clothing.

So if weather balloons the cost installation of 2 GHz relocation equipment, who pays? "If costs are increased due to weather, since Sprint is responsible for funding the BAS transition, we would assume those increases," said Sprint-Nextel spokesman Scott Sloat.

Weather-related delays are not new to the BAS transition efforts. Sprint-Nextel's August 2008 BAS Relocation Project Progress Report to the FCC detailed a snow-cat-aided site-survey visit in late-May of this year to Nevada's Slide Mountain, home to a number of Reno BAS licensee towers.

"When the installers arrived at the peak, what they found surprised even the veterans on the BAS transition team: buildings, towers and cable troughs were all buried in ten-foot deep packs of snow and ice," according to the report. The team was able to conduct only "limited reconnaissance and ultimately had to postpone its work until mid-summer when the snowpack finally began to melt."

The Reno market was able to complete its installations and cut over to the narrowed BAS channels at the end of July, one month later than scheduled.

A 'WIDE VARIETY OF FACTORS'

While mountaintop communication sites above 10,000 feet provide the most extreme examples of delays weather can cause, they're not the only ones likely to face delays in installation should equipment shipments fall behind. Stations surveyed by TV Technology in the Seattle market pointed to sites they maintain on mountain peaks measured in mere thousands of feet that can become inaccessible and unserviceable in the winter months. Seattle is scheduled to cut over to the new BAS channels next April.

"Meeting the cutover schedule depends on a wide variety of factors including equipment availability and weather," said Sloat. "Sprint continually works with the broadcasters, equipment manufacturers and installers to minimize any delays caused by equipment orders, fulfillment and installation. However, at times equipment delays do impact a market's cutover schedule and weather can further impact the schedule."

HSE's Hellyer remembered when his plans included having a number of months, in the summer, to install the new digital microwave gear for his BAS licensee clients. "Everything has been pushed back and pushed back, and now it's all of a sudden, most of the gear is arriving in one big pile, which totally changes the installation requirements of the project," he said. "Now if you're in southern California, it's not a big deal. But when you're in mountain country, it is a big deal when the equipment arrives late."