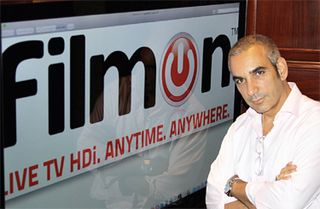 SEATTLE
The Internet rebroadcasting battle has reared its ugly head once again.

Just a little more than a decade ago, during the height of the Internet boom, a Canadian website called iCraveTV.com began offering streaming broadcasts of over-the-air channels from Canada and the United States. The Web site's owner, Canadian media investor William Craig, touted the service as equivalent to a cable distribution channel. A U.S court, however, disagreed, and in February 2000 it issued an injunction that prompted Craig to later voluntarily shut down the site.

While broadcasters were fending off this challenge from Craig, the Recording Industry Association of America was trying to close down Internet music sharing company Napster for similar copyright infringements. Little did anyone know that rapid advancements in Internet technology were just beginning to present long lasting issues for both the music and broadcast industries.

Fast forward 10 years and broadcasters are now battling Hal Bringman, one of the Napster promoters who had earlier created headaches for the music recording industry. This time Bringman has co-founded a start-up Internet streaming company in Seattle that is streaming broadcast signals and copyrighted programming on the Internet. When broadcasters balked and asked the new Internet startup, called ivi.TV, to cease and desist, the new company filed an anticipatory lawsuit in September in Federal District Court in Seattle. Within a week, 24 of the biggest media players in the country filed a countersuit in New York Federal Court for copyright infringements. Much like iCraveTV 10 years ago, ivi.TV is asking, according to its lawsuit, "to be covered under 'secondary transmissions' of 'primary transmissions' when permitted by the Federal Communications Commission (FCC)."

Neither the networks, cable companies, nor content providers agree with ivi.TV's assertion and cite other FCC rules that require consent before retransmitting the signal of a broadcast station. "ivi was effectively pirating our affiliate KIRO's broadcast signal and copyrighted programming, and streaming it over the Internet without our permission," explained Cox Media Group's Vice President Bill Hoffman on why they joined the suit.

Digital Rights Management (DRM) and the protection of online content are being championed not only by broadcasters and movie studios, but by content providers as well. Groups like Major League Baseball, Disney and Twentieth Century Fox have also joined in support of the suit. In a joint statement the plaintiffs said, "Our complaint filed today with the U.S. District Court of New York underscores our commitment to protect our rights vigorously. This is a company that's simply stealing our broadcast signals and copyrighted programming, and streaming them on the Internet without permission."

The National Association of Broadcasters (NAB) soon signaled its support saying, "It is blatantly illegal to steal broadcaster's copyrighted works and signals. We strongly support broadcasters and their program suppliers in their efforts to combat copyright abuse and signal piracy."

According to the FCC, it has not been contacted by either side in this argument, and it will eventually have to defer to the Copyright Office to determine whether new technologies like the Internet are subject to the same redistribution regulations as cable and other traditional broadcast entities they govern.

WHICH SIDE HOLDS MERIT?

When iCraveTV was first sued, part of the copyright infringement complaint dealt with the manner in which the company was redistributing the material. Due to small image size, primitive video codecs of the day, and advertising banners, the broadcasters complained that the manner in which the images were being rebroadcast violated their copyrights. Content owners had no desire to see their images reproduced and rebroadcast to the public in an inferior manner. With today's high bandwidth connections and advanced encoding software these issues no longer exist, but the copyright issues remain.

Alki David, owner, FilmON.com Interestingly enough, another streaming company has also incurred the wrath of broadcasters recently. The same week that they filed the ivi.TV lawsuit, the four major network groups along with their associated studios filed suit in New York District Court against FilmON.com, a streaming site launched in late September and which had been successfully operating in Europe for years. Although owner and financier Alki David had indicated that he has some deals in the works, he has not negotiated individual carriage deals with broadcasters, according to TV Technology sister publication Broadcasting & Cable. Employing a similar argument in their suit against ivi.TV, the networks claim that FilmON.com is violating copyright rules.

Bruce Leichtman, president and principal analyst with Durham, N.H.-based Leichtman Research Group, says that the dilemma of broadcasters using the Internet has always been not to lure away eyeballs in a way that affects revenue. His company works with media organizations on analyzing the impact of Internet strategies. "If people are watching over the Internet, the ratings could be affected and thus cost the station money," he said. Leichtman also sees a big issue with the way ivi.TV will handle sports. "In every aired broadcast sporting event there is a disclaimer that states the material cannot be rebroadcast without written consent of the owner," said Leichtman. "if ivi rebroadcasts a game without permission, then they are violating that message."

The company causing this stir was not even on anyone's radar screen until it launched its service on Sept. 13. Led by CEO Todd Weaver and cofounder Bringman, the two have burst onto the scene in a hailstorm of controversy. They, like many other Internet startup founders, view their business plan as innovative and entirely legal. "This is not about copyright or technology, it is about competition," said Weaver. He says Congress created the compulsory licensing system for cable operators to distribute content to the masses. "We intend to increase viewer numbers and welcome opportunities to work with the broadcasters," he said.

Todd Weaver, CEO, ivi.TV Though incorporated since 2007, the owners say that the last three years have been spent finalizing their concept and building their technology. They believe their business model is above board and will eventually be accepted. Bringman, who in addition to being a co-founder is the company's spokesperson, said "We are paying broadcasters, operating in good faith. We just happen to be pushing others to innovate faster than they planned on."

The broadcasters have taken issue with this and released a joint statement saying in part, "This company is simply stealing our broadcast signals and copyrighted programming and streaming them on the Internet without permission."

Weaver said that ivi.TV initially approached local broadcasters who were receptive to their ideas and service, but who later backed down from pursuing it. "What followed our discussions was that the broadcasters realized that they were contractually inhibited in one way or another and could not expand to include us in their distribution chain." Weaver said.

The broadcast revenue model is built around secure and controlled distribution channels that can be monitored and have metrics pulled on viewership. These ratings are where most of the broadcaster's revenue is derived. A new method of uncontrolled distribution over the Internet raises multiple problems for broadcasters, which is why the courts and regulatory agencies will be busy in coming months tackling the issue.

Nielsen, the broadcast ratings agency, has been working on methods of tracking Internet signal distribution, but there is no current gold standard for broadcasters to use. FilmON has just announced a partnership with comScore Inc, a leading Internet metrics company, on a collaborative effort to provide broadcasters with advanced analytics on the viewership habits of their streaming service. This information can then be used to supplement traditional ratings numbers.

Comment on this or any story. Write totvtech@nbmedia.comwith “Letter to the Editor” in the subject line.