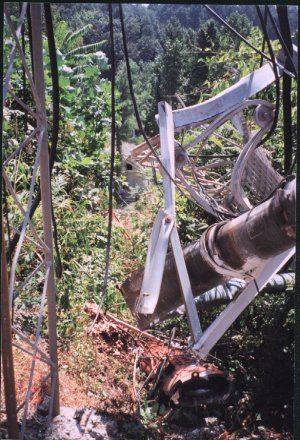 (Editor’s Note: TVB is presenting this 2003 interview with Mohammad Ayub in the wake of a viral video showing a technician free climbing a 1,768-foot structure.Ayubwas the OSHA official who investigated several tower-related fatalities at the time. TVB has no desire to ever report another such fatality.)
by Deborah D. McAdams for TV Technology
October 29, 2003
WASHINGTON: It beggars the imagination to think of a 1,000-foot television tower as fragile, but last month’s tower collapse near Huntsville, Ala., was another reminder that these structures can come down in the blink of an eye, with tragic results. Three men working on the 985-foot WAAY-TV tower were killed when it fell to the ground on a calm, clear afternoon.

In each incident, a team of investigators from the Federal Occupational Safety and Health Administration (OSHA) was sent to investigate the cause. In each incident, Mohammad Ayub led the team. Ayub is the director of the Office of Engineering in OSHA’s Directorate of Construction. He agreed to talk with TV Technology about his findings.

It should also be noted that Ayub’s findings point to a dearth of proper training among tower wranglers. Subsequently, TV Technology contacted several companies that do tower modification and repair to inquire about training standards, and found a dearth of responses. Understandably, the industry is mum in the wake of the Huntsville collapse. That tower was owned by SpectraSite Broadcast Group in Irving, Texas, and being modified by a team of SpectraSite workers. SpectraSite attorneys have effectively muzzled the company’s officials, some of whom are considered by the tower brethren to be among the most safety-conscious in the business.

TVT:What are OSHA’s basic requirements for broadcast tower safety?
AYUB: OSHA does not have, per se, a TV antenna tower safety requirement. All we expect is that they follow basic engineering principals and standard practices. Any worker climbing up a tower needs to have fall protection.

TVT:Have OSHA investigators identified similar factors among the tall tower collapses since 1996?
AYUB: Yes, we have-a lack of understanding of the behavior of the tower on the part of the workers. They really fail to understand how the tower behaves and what makes it stable.
Most of the modifications are being done to install new DTV antennas, and they weigh much more than old antennas ... so the tower needs to be upgraded. Most of the time, upgrading involves replacing diagonals, or horizontal members, and sometimes guy wires. If they don’t understand that each member is so critical for the stability of the tower, they will just remove a horizontal member without using a replacement [such as] a come-along -- a wire rope -- which can be attached to the tower to take place of the horizontal member.
They are not doing that.
Other times, they will also take away two or three diagonals at a time, weakening the tower. They need to replace only one diagonal at a time, using either a come-along or a frame -- a 9-by-10-foot structure that attaches to the tower.

TVT:Is geography, season or age a factor in collapses?
AYUB: No.
All the towers have been designed up to a certain standard. Even in the face of high wind or snow, or ice forming on the guy wires or on the structural members, there is enough structural safety built in that it should not just fail.

It might fail if structural members become weak due to the corrosive damage. Then if there’s wind or ice, it might have some impact. But as a general rule, no.

TVT:What should all crews do before repairing or upgrading a television tower?
AYUB: They should undergo training so they can understand the importance of each member.
They should be shown, step by step, exactly how to replace the members, and they should be cautioned that there is no redundancy in the tower. If you take away one member of the tower, you might jeopardize the safety of the whole tower.
Also, they should not use a gin pole unless a structural engineer has determined if the tower can take the load. Gin poles weigh 8 to 10 tons, and since they are attached only on one face of the tower, a structural evaluation is necessary.
(Gin poles are used to raise antennas from the ground to the top of towers. They are about 3-by-3 feet in diameter, and can be anywhere from 80 to 160-feet long. The gin pole is raised on another temporary structure called the “track,” which generally weighs around 1,500 lbs.)
They must be told how high the gin pole can be raised above the track. Sometimes, we find the gin pole has been raised too high above the track. The top of the gin pole may have to rise 80 or 90 feet above the tower, because these antennas are also very tall.
They have to hang the new antenna from the top of the gin pole, and then slowly bring it down on top of the tower. In one incident that we investigated, we found that the gin pole was raised too high above the track. It became unstable and fell off, and the whole tower collapsed. For extending the gin pole above track, the rule of thumb is 50-50. If the gin pole is 160 feet long, don’t raise it more than 80 feet above the tower.

TVT:What precautions should broadcasters take to prevent tower accidents?
AYUB: One of the major problems is that consultants who design tower modifications do not address the manner in which modifications should to be made. This is true for all construction-for buildings, even for bridges. They leave it entirely up to the contractor, maybe due to insurance and liability issues.
The construction consultant who does the drawings for tower modifications should highlight that the diagonals and horizontal members are really critical to the tower. We have been saying this for a long time.
Most tower workers are young people, 18 to 24. A young person may feel, ‘hey, it’s a 2,000-foot tower. If I just take away two or three diagonals, what should it matter?’ But if there’s a big warning on the drawing, saying, ‘watch out, these diagonals and members are very critical,’ perhaps it would drive the point home.