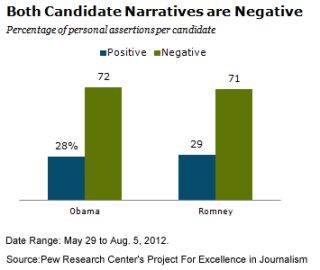 The picture painted in the news media about who the two presidential candidates are and their respective records is as negative as any campaign in recent memory, according to a study released Aug. 23 by the Pew Research Center's Project for Excellence in Journalism (PEJ).

The study, which looked at the master narratives in the media about President Barack Obama and former Massachusetts Governor Mitt Romney, finds that 72 percent of coverage of both candidates’ character traits and records has been negative.

On Fox, the coverage of Romney has presented a mixed view, but its coverage of the Obama record and the president’s character has been negative by a 6:1 ratio. On MSNBC, the numbers are nearly identical, but in reverse. CNN’s coverage resembles what is available in the rest of the media, the study said.

The source of the stories shaping the master narrative is changing, which may be responsible for the overall negative coverage. Since 2000, the percentage of assertions about the candidates coming from journalists has dropped by almost half-from 50 percent to 27 percent. The percentage of what the public hears coming from the campaigns and their allies has grown from 37 percent to 48 percent, according to the study.

"The American news media in its coverage of the candidates appears increasingly to be a conduit of partisan rhetoric and less a source than it once was of independent reporting," said PEJ director Tom Rosenstiel. "This may reflect the impact of shrinking newsrooms. But it probably also helps explain why the campaign feels so negative."

The top media narrative about Obama is that his economic policies have failed. Thirty-six percent of the statements about his character and record make that case-more than twice the number (16 percent) that suggests he has helped the economy.

For Romney, the tops narrative is that he is a "vulture" capitalist who doesn't care about workers. That narrative accounted for 14 percent of the statements about his character. Thirteen percent conveyed the idea that he is a wealth elitist.

This is the fourth presidential campaign in which PEJ has measured the master narratives in the press about candidates.