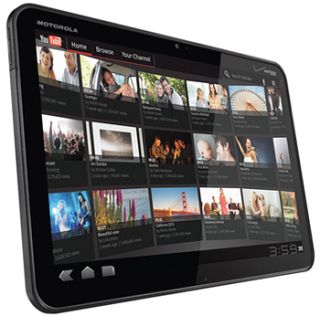 BETHESDA, MD.—If you thought Google was already aggressive about its plans and pursuits for wireless spectrum, you ain't seen nothing yet. The company's $12.5 billion acquisition of Motorola Mobility not only gives the software-turned-media/telecom giant reach into millions of homes via cable set-top boxes, it also thrusts Google even deeper into the battle for wireless spectrum.

The company has already backed efforts to use airwaves, including white spaces and blocks of broadcast channels, for mobile and wireless services. It has experimented as a local WiFi operator in the San Francisco Bay area. When the deal culminates, Google/Motorola, one of the world's largest suppliers of wireless hardware—including handsets, tablets and other devices—will have an even louder voice in the quest to assign greater bandwidth to non-broadcast uses.

Google’s new hardware: VIP1200 set top box (left) and the XOOM tablet, both inherited from Motorola. Google's motivation to acquire Motorola has generated massive speculation, with most analysts citing "patents, patents, patents." Motorola's technology trove includes up to 25,000 issued and pending patents, many of which can be exploited in the converging digital world. Some experts see the Motorola takeover as an Android defensive move to prevent another cash-rich software firm—Microsoft—from buying Motorola; such a move would have given Microsoft's Windows Phone 7 operating system (and subsequent versions) a huge foothold in the effort to displace Android.

Inevitably, a deal of this magnitude faces regulatory and financial scrutiny. The companies expect that the agreement will be consummated by early 2012 after Federal Trade Commission and FCC review. The sheer size of the deal requires a look at antitrust issues, and the FCC must approve the transfer of a few licenses for airwaves that Motorola uses in select applications.

Bigger challenges lie arise on the business management front. For example, in 2005 Motorola established a broad "strategic relationship" with Comcast, its largest cable customer. The Combined Conditional Access Development and Conditional Access Licensing agreements create a wall that could limit Google's ability to shove aside current operating procedures in favor of an Android IP solution. Comcast is also believed to have a controlling interest in the Motorola Digital Access Controller, which plays a fundamental role at Motorola-built cable headend facilities.

Motorola's support of the QAM-based platform will also be under review, although the financial implications of migrating away from that video format are off-putting.

In the heterogeneous cable industry, that kind of inbreeding offers assurances: if it's good enough for Comcast, it's OK for other companies to use the technology, since the multiple system operators don't compete with each other's franchise turf.

Contrarily, on the wireless side, Google's stake in the Motorola handset business may be a hurdle for other device makers. Samsung, LG, HTC and other handset makers may squirm about letting Android into their future products, suspicious that they're using a technology that their competitor Motorola has on an inside track. Perhaps Motorola's waning market share (down 3 percent in second quarter 2011 compared to 2010), may help assuage such fears. Nonetheless, Microsoft is sure to leverage its independence when it tries to recruit Windows Phone 7 allies.

And Apple can use the Google/Motorola co-dependence to push the value of its iPhone operating system, which recently lost ground to Android (even though Apple operates on a vertically integrated model itself).

Google Chairman Eric Schmidt was expected to lay out ideas for the evolving relationship between the merged company and other industries at the MediaGuardian Edinburgh International Television Festival in late August. Schmidt delivered the MacTaggart Lecture, the first time in the Festival's 35-year history that an executive from outside the TV/media industry took that prestigious rostrum. He was expected to propose that Google and TV industry collaborate as they all address new digital opportunities. (Schmidt's speech occurred after this print edition's deadline.)

The range of Google's challenges as it moves closer to the media industry are vast. There will be considerable hand-wringing throughout the media/telecom landscape about Google's stances and objectives that affect the status quo. As a strong advocate of network neutrality, Google stands on the other side of the fence from carriers (including wireless and cable companies).

Similarly, Google's stance on the FCC's "AllVid" inquiry poses another tightrope as the merged entity faces off with set-top box customers such as Verizon, AT&T and Comcast. Google's fiber-to-the-home experiment in Kansas City, offering a 1 Gigabit service, is an aggressive confrontation with MSOs and telco TV providers about the structure of local networks.

On the collaboration side, Google brings to both cable and broadcast—and also to the nascent mobile advertising sector—its extensive toolkit of advertising placement and measurement tools. In particular, addressable advertising, which is a Google core competency, has been "a holy grail of the cable industry," as Bernstein Research Senior Analyst Craig Moffett puts it. He notes that Google has the capacity for the "truly staggering data processing component" of such services and it has "never seemed particularly vexed by 'fears of violating consumer privacy.'" That combination opens opportunities of set-top personalization on many fronts

In addition, through both the STB and mobile handset, Google can expand ad measurement, setting up a potential rival to Nielsen. Although such an objective is not stated in Google's takeover bid, Moffett observes that, "with its preexisting relationships with advertisers and media buyers" Google/Motorola is "uniquely situated" to provide such advertising services.

In some ways, Google's expanding collection of companies and services resembles the vertical integration of RCA at the height of its powers. In its day, RCA manufactured equipment (both production/studio gear such as cameras, microphones) and also made home receivers, including TV sets and VCRs; it produced programs (at its NBC studios); and it transmitted them to homes via its broadcast networks and its owned-and-operated stations. Similarly, Google has its fingers in many segments of the communications value chain: software to design, create, manage and navigate (the modern version of hardware), content (YouTube, which now offers full-length programs as well as consumer-generated clips) and reception tools (such as the foundering Google TV technology).

With the addition of Motorola, Google will expand its role in that last category: receivers—both set-top and wireless. Although Google TV arrived with a thud, the concept it represents—on-demand content surfing—remains appealing. The success of TV Apps, now available on "smart TV" sets from dozens of manufacturers, poses an alluring opportunity, if it can be comfortably accommodated within the cable TV environment.